I used Migration Assistant to move all of my applications and data from my old Mac to the new Mac. And, as expected, everything just works. The new Mac has everything from the old Mac. It took about ten hours to move all the data — roughly 300 Gigabytes — from the old machine.

Then the big test. Running Vista on the new Mac. I downloaded VMWare Fusion for the Mac. I originally intended to use Parallels except that Fusion was getting a lot of great reviews. I can see why. The easy install brought Vista up and running within 30 minutes. I have never installed a Windows operating system from scratch in such a short period of time.

I put up Vista Ultimate and I can either use it in full screen mode where it looks and acts just like a Wintel machine or I can keep it in a window just like any other Mac app.

I can finally ditch the second box in my office. I can run the few apps I still use from my PC on the Mac. The best of both worlds.

So cool. Below is a screen shot of Vista on my Mac desktop. 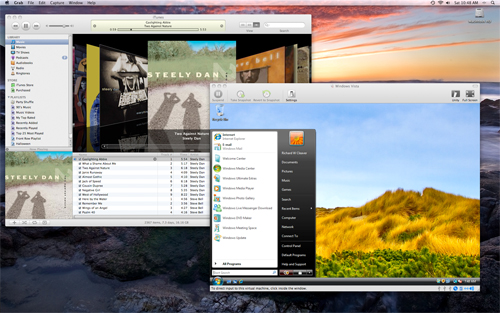