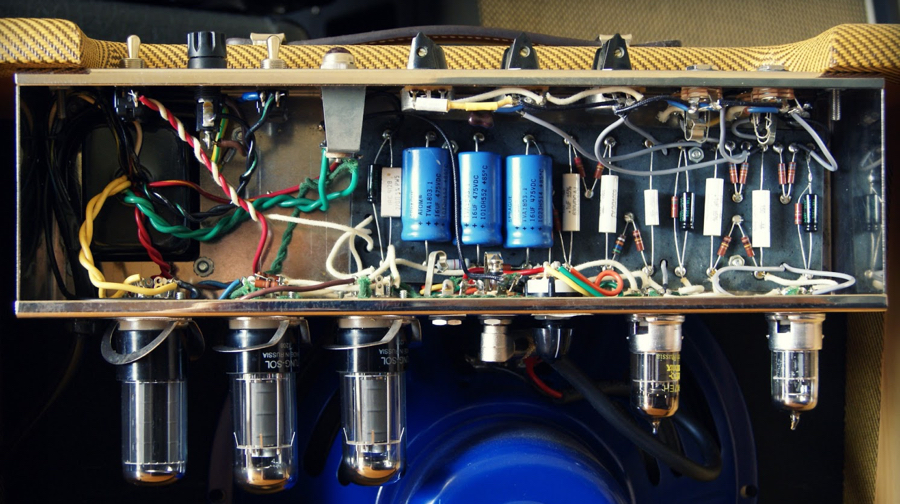 I had posted about retubing my Mesa Boogie Lone Star Special amp here and here.

4 JJ EL84 power tubes, 5 JAN-Philips 12AX7 preamp tubes and 1 Sovtek 5Y3GT rectifier tube. At first, everything seemed fine. As the tubes burned in, the sonic character of the amp changed noticeably. Where I had kept channel 2 as a higher gain channel — clean with some dirt if driven hard from the guitar — I engaged the Drive to push more of an overdriven sound. The distortion sound was rich in harmonics and sounded awesome. Far sweeter than the old tubes. But, during rehearsals a few weeks back, and ever since, the volume of the amp randomly drops. Dramatically. It’s almost as if the amp loses headroom.

Obviously, tubes might be an issue. Or perhaps a transformer.

Searching the web, I found some folks had experienced the same issue. And specifically highlighted the Cathode Follower Tube as suspect.

Most (but not all) Mesa/Boogie amplifiers have one or two “cathode follower”? tube stages in their preamps. Tube selection is CRITICAL in these stages.

Specifically, in a 12AX7 tube used as a “cathode follower”?, the voltage difference between that present at the cathode, as compared with the heater voltage, can be withstood or tolerated by certain types of tubes, whereas other tubes will fail. The failure of a “cathode follower“ tube will cause sound dropouts or signal loss.

For the past few years, Mesa has been using two types of 12AX7 tubes: ones originating in Russia (Sovtek EH), and ones originating in China. The Russian (Sovtek) tube is NOT reliable as a cathode follower. Of the tubes we are using today (March 2008), ONLY THE CHINESE 12AX7 IS RELIABLE AS A CATHODE FOLLOWER.

In conclusion, if you are troubleshooting for signal dropout in a Mesa/Boogie amp, suspect a cathode follower tube, and try replacing it with a Mesa 12AX7 that is marked as “CHINESE”? (silk-screened on the tube itself).

Below is a partial list of Mesa amps and cathode follower tube locations:

ANOTHER POSSIBLE SCENARIO may occur in the “SPONGY”? (or on some models, “TWEED”?) power setting: the reduced filament voltage may cause very low output from a RUSSIAN preamp tube. Again, the recommended fix is to replace the “sagging”? tube with the CHINESE type of Mesa 12AX7 – which are more immune to this type of failure.

I will try to source a Chinese tube today. The JAN-Philips tubes are US but I do have quite a few Russian tubes. And it looks like I will have to make a trip to Toronto to find some Mesa tubes if I can’t get this resolved. Lots of playing ahead over the next two months and the Lonestar Special has my tone. But not with random sagging.

I purchased my Mesa Boogie Lone Star Special 1×12 combo amp back in 2005. Wonderful sounding tube amp. A few weeks ago, one or more of the tubes became microphonic. I was able to trace the noise back to one set of power tubes — they operate in pairs — although it looks like I need to retube the whole amp. It has been four years after all.

Although I do pay some attention to the tone wars on tubes, I’m not sure that I have the time or money to audition dozens of them. I ordered a full set of tubes from thetubestore.com, a Canadian source for such products. I purchased 4 JJ EL84s, 5 JAN-Philips 12AX7s and 1 Sovtek 5Y3GT.

I still used the amp over the past two week-ends and it held up fairly well although I did have to put it to standby when I was not playing.

Some players believe that retubing opens up the sound of an amp. That even after six months or so, the tubes can become “tired” with frequent play and the sound does not bloom as it should.

Not sure I believe that but I do know that when tubes start to go microphonic, it is time to replace them. Funny, the tubes on my 1984 Fender Super Champ were replaced only once after 20 years. I replaced the tubes with some highly recommended NOS tubes. I did not notice a major change in sound. Did the amp sound different or better than before? I guess spending a couple of hundred dollars on tubes might influence the answer to that question.