While many Canadians, particularly those now close to 65, are on a path to the retirement of their dreams, the data show that millions of others are headed for a steep decline in living standards in the decades ahead, particularly those who are currently younger and who are in middle-income brackets.

Those born during WWII are positioned to maintain virtually all of their pre-retirement consumption patterns: after allowing for the drop in living costs, they have a replacement rate close to 1.0. The leading edge of the baby boom generation (post-WW II, born between 1945-64) that followed is only slightly less advantaged. But their children are much less well positioned, given the current trend towards lower savings rates and reduced private pension coverage. On average, the replacement rate of those born in the 1980s, who will retire towards the middle of this century, will be only 0.7, implying a 30% drop in their standard of living.

He finishes his update with the following statement:

Add it all up, and there are some 5.8 million working age Canadians who will see more than a 20% drop in their living standards upon retirement. That”™s why the time to act is now.

Replacement rates are tricky things to determine. Retirement, from a financial planning perspective, is a compromise between needs and wants. Given the progressive taxation system, a high-income earner in Canada requiresÂ a lower replacement rate to maintain the same standard of living. And, according to the government’s own research findings, a low-income earner will actually be better off in retirement:

If you happen to be in the middle income group and you do not work for the government, sufficient income at retirement mightÂ be a challenge.

The Ontario Government published an interesting study on Retirement Income Security. The following chart highlights the potential impact of the gap in income: 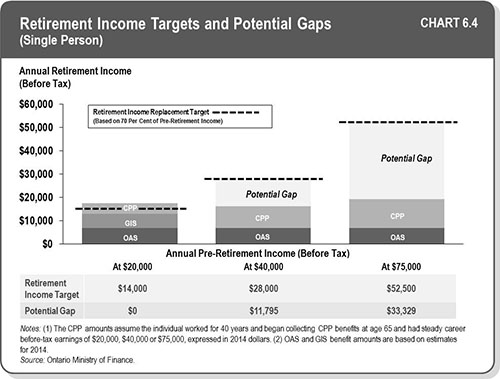 If an individual has income of $75,000 before tax, the replacement rate of 0.7 would suggest a retirement income target of $52,500. After CPP and OAS, this individual would face a potential income gap of $33,329. To produce $33,329 reliably would require savings between $670,000 — 835,000 depending on your planning assumptions. Now, if you had a pension plan, that would likely offset most of the gap. But what if you did not need to replace 70 percent of your working income?

Malcolm Hamilton is a pension expert and he thinks that the 0.7 replacement rate is too high.

Canadians don”™t need to “replace” 70 or 80% of their working incomes, which are the percentages usually proffered by our financial institutions. Most of us will be able to get by with 50% or even just 40% of what we earned in our working lives. “No one can tell exactly how much we will need to save. Canadians are unduly and irrationally discouraged about their prospects.”

He also provides an example:

A typical Toronto couple with two incomes totalling $120,000 a year probably spend $480,000 on a modest house and have two kids. If they save five times their gross earnings and accumulate $600,000 in capital, they could replace 52% of their income in retirement. To get there, they”™d simply need to save 6% of their income between ages 25 and 65, at which point they could retire. They would direct 23% of earnings to taxes, CPP and EI, and another 23% to pay for the house and kids. In all, 52% of their gross working income goes to taxes, savings, the house and children. At 65, all those expenditures disappear. The $600,000 capital will replace 20% of the income they were earning in their working lives, and CPP and OAS will generate 32%, for a total 52% replacement ratio. That will allow them to spend as much on themselves as they did when they were working.

Should we be saving for retirement? Of course. Do youÂ need a high replacement rate? Probably not. Particularly if you are a high income earner. And, if you look at your current expenses, how much do you spend on taxes, CPP, EI and the house and kids? If you have a pension, you may not need to save much at all if you plan to work to 65.

I like Hamilton’s perspective. We should be optimistic about our prospects.