Looking back in 2008, there were a number of highly successful ad campaigns. And the one that hit with the most media publicity was the $300 million Microsoft ad campaign featuring Jerry Seinfeld and Bill Gates.

Lots of buzz for that ad campaign. Some might even say an unprecedented campaign. Although not without a few side effects. 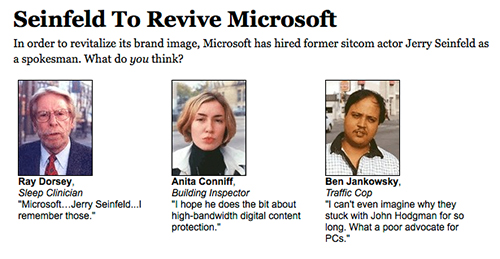 In a memo to all Microsoft employees on July 23, Ballmer said “Now it’s time to tell our story.” And that later in the year, Microsoft would roll out an effort to redefine the meaning and value of Windows.

The Globe and Mail reported yesterday that Microsoft has signed Jerry Seinfeld as part of a 300 million dollar branding campaign. The comedian who championed a television series about nothing will champion an advertising campaign about Vista. RealDan provides an interesting perspective on the campaign.

The negative public perception of Vista is well known to Microsoft and evidence for their concerns can be found at the Mojave Experiment. Remember when Coke tried the same tactic with their failed New Coke product?

We’ll see if the Seinfeld ads have the same impact as the PC/Mac ads.