Every once in a while, clicking on links takes me to some very odd articles. Like this one from Vogue. The story is a profile on Melinda Gates. Much of the article is focused on her ambitious goals to solve world hunger and disease. And then the article degenerates into this nonsense:

Bill and Melinda Gates live with their three children (two daughters, aged twelve and six, and a nine-year-old son) in an enormous mansion on the shores of Lake Washington that Gates began building long before he was even married. They are both deeply protective of their children”™s privacy but do as much as possible, given the need for a certain amount of security, to ensure that they grow up normally. “It is essential to them that those kids have as regular a childhood as possible,”? says Melinda”™s brother Raymond French. “They go to parks, have playdates and sleep-overs. Melinda is fierce about this. There will be no bubble for them; these children will not turn out to be Paris Hilton.”?

Okay, I buy how essential it is for the richest people on the planet to create a regular childhood for their kids. But then the kicker:

Still, being a Microsoft child does carry unusual burdens. “There are very few things that are on the banned list in our household,”? Gates tells me. “But iPods and iPhones are two things we don”™t get for our kids.”? Harsh, perhaps, but understandable. After all, it”™s hard to walk around tethered to merchandise made by your father”™s most famous competitor. Still, Gates acknowledges the inevitable lure of forbidden fruit. “Every now and then I look at my friends and say, ”˜Ooh, I wouldn”™t mind having that iPhone.”™”?

In September, Microsoft Chief Executive Steve Ballmer spent a week traipsing across Europe and parts of the U.S. schmoozing 17 of the world’s largest handset makers and wireless carriers. It was Ballmer’s longest trip ever aimed at drumming up support for Windows Mobile, the company’s software for cell phones. The trip may not have been long enough.

In recent months, Microsoft’s (MSFT) mobile strategy has hit a rough patch. In the third quarter, iPhone maker Apple (AAPL) shipped more smartphones than all 56 device makers that make Windows Mobile phones combined, according to research firm Canalys. As a result, Windows Mobile slid from its position as the world’s second-most popular mobile operating system a year ago to the No. 4 spot, behind Nokia’s (NOK) Symbian, Apple’s OS X, and Research In Motion’s (RIMM) BlackBerry.

From Paul Thurrot’s SuperSite for Windows:

As I noted previously, I did meet with Windows Mobile this week. They”™re good people, smart people, and they seem to understand the issues. They also seem to value the business market more than the consumer market, but that might only be because that”™s what they pretty much offer at this point. I will be writing more formally about Windows Mobile by the end of the year, but I wanted to at least mention one thing I found vaguely alarming. When asked about the success of the iPhone and how that impacts Windows Mobile, I was told that the iPhone “validated”? Microsoft”™s approach. That”™s some weird combination of revisionism, wishful thinking and, perhaps, delusion.

It could well be that this “the iPhone validates our approach”? thing is just bullshit doublespeak ”” that the Windows Mobile team knows full well just how bad a position they”™re in at this point but they can”™t bring themselves, or are not permitted to, admit it publicly.

But if that”™s truly the mindset of those leading Microsoft”™s Windows Mobile team, that”™s delusion, and they”™re pretty much dead. Microsoft”™s response to the original Macintosh, Windows 1.0, appeared by the end of 1985. Their response to the iPhone is nowhere to be seen.

And, of course, the always insightful Steve Ballmer from last year.Â

Apple has over 10,000 apps in their store. And someone created this image to celebrate the event.

But, the image is far more compelling when viewed full size here. Amazing! 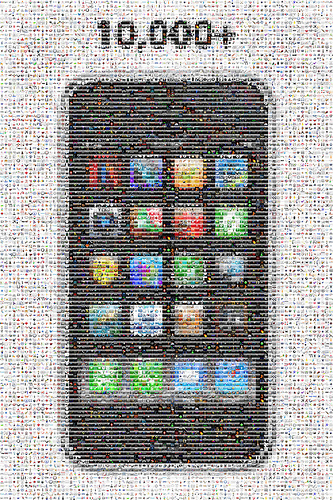