The Lonestar Special was set and ready to play in my studio last night. Absolutely unbelievable tone. And remarkable build quality.

The 1×12 combo is larger than my Fender Deluxe Reverb Reissue and somewhat heavier. I opted for the Lonestar Special over the classic and a combo style over an amp/cab style for a number of reasons.

My primary use for the amplifier is recording work and mid-sized venues. The Lonestar Special allows switching between 5/15/30 watts. This makes it perfect for recording work. And, I can easily move the combo for live work, which, at my age, is an important consideration. Gone are the days of lugging 70, 80 or more pounds of gear to a gig. I have used a 22 watt Fender for several years for stage work and I never had an issue with volume. At 30 watts, the Lonestar Special is plenty loud enough for me.

I was also looking for an amplifier that could cover blackface, plexi and other vintage-style tones. And the Lonestar Special is really a tone workstation. I had to front-end the Fender with an overdrive to get the amp to break up. With the Lonestar, I can configure channel 2 and dial in the level of drive. And, there is a solo mode that gives more boost to the channel.

Needless to say, I am a bit excited about the new rig. I will have to rethink my pedalboard. This new amp pretty much eliminates my overdrive and distortion pedals.

Now, if only I could carve out a bit more time to break it in.

I purchased the following tubes:

The difference in tone was not subtle. It was dramatic. The tubes completely changed the voice of the amplifier. And I mean completely. I now own a different amplifier.

At first, I wasn’t sure about the change. I had to rediscover the amplifier’s sweet spot. Gone was the excessive brightness. Gone was the washed-out reverb. Gone too were all the settings on the amp, guitar and pedalboard for the other amp I used to own. Panic set in as I had to figure out how to dial in the best sound from this new amplifier.

I spent several hours on Friday evening tweaking tone. The amp was also used in session to track some electric guitar overdubs. The tone, as with the playing, was inspired.

I used the amp on stage on Sunday and I was thoroughly delighted with the changes. The new speaker is due to come in shortly. I wonder if the change in speaker will be equally as dramatic.

I suppose I could always buy a really, really old amp. Like the Gibson pictured below. Perhaps that is the best way to get vintage tone? 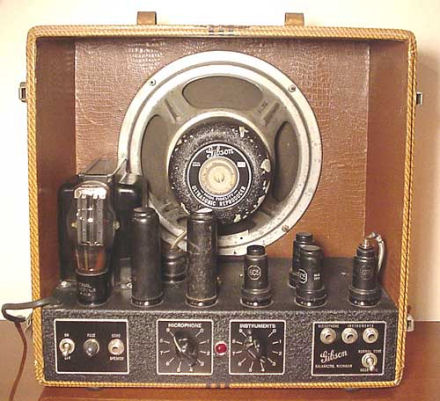