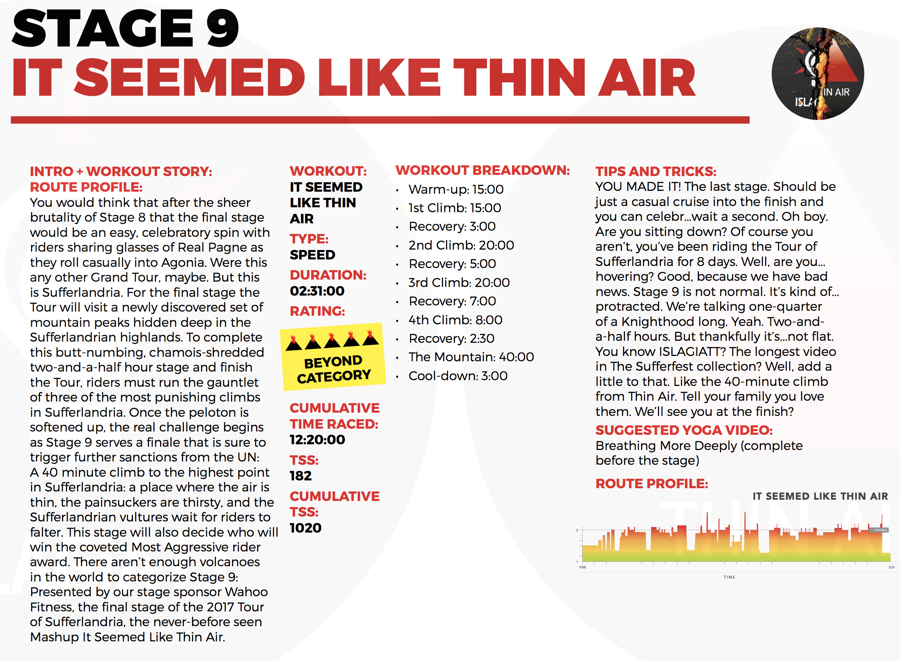 That’s it. I finished the 2017 Tour Of Sufferlandria. I’m not sure how, but I finished all 9 stages.

Last year’s tour was challenging. This year’s tour? Well, let’s just say that it was one of the hardest things that I have done on a bike in recent memory. Sure, there were probably times when I was racing way back in the 1970s when I probably killed myself on a ride. This year’s tour, coupled with a smart trainer, provided a new definition of suffering on a bike.

I’ll need a couple of days to recover from all of this abuse.

I do feel a sense of accomplishment. The rides are tough and you get out of them what you put into them. I gave it everything I had for 9 consecutive days. There were times when I did not think I would be able to finish and yet I was able to push through those moments and I was able to finish what I started.

I’ll do my FTP test in another week or so. I expect that I have been able to push things up a notch. Although super sore right now, I know that I will be ableÂ turn up some serious wattage for the outdoor rides that will be here in another 6 weeks or so.

Clearly waking upon a very bad mood, Grunter von Agony demanded the Minions create a horror film about climbing. So they mashed up all but one of the climbs from ISLAGIATT with the 40 minute monster from Thin Air for a total of five leg-breaking ascents. Upon the advice of National Team Coach Sir Neal Henderson, we”™ve set the targets for this workout 10% lower than normal so that you”™ll actually be able to finish it (you”™ll be on your knees begging for it all to end, but you *should* (maybe)(kinda)(sorta) be able to finish the full 2.5 hours.