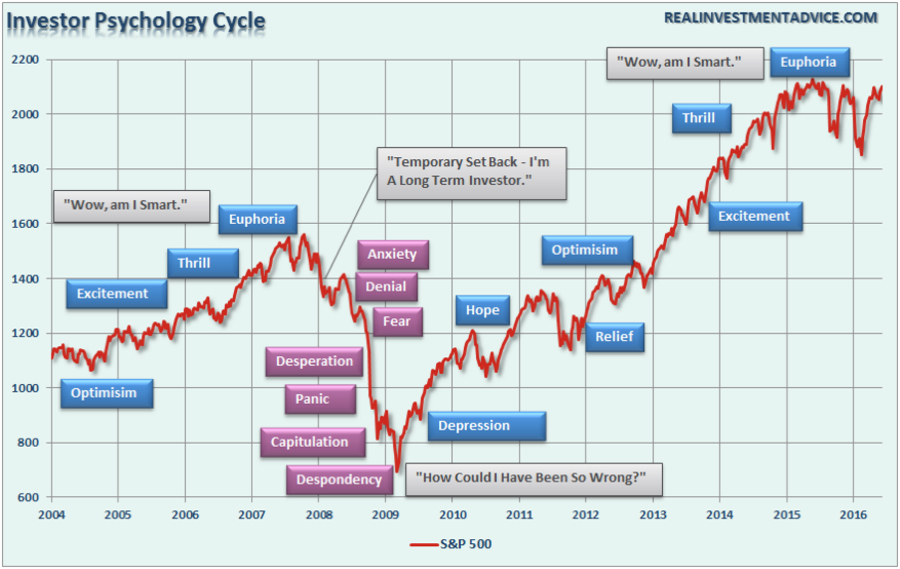 Bloomberg asks the question: are you as stupid as your financial advisor thinks?

Investors need to be saved from themselves.Â That”™s the conventional wisdom, and there”™s some truth to it. Individual investors can have comically bad timing. They buy when stock prices are high. They panic and sell when markets plunge. They invest with the hot mutual fund managers just as the managers’ luck runs out.Â And what’s their reward? They supposedly underperform the very mutual funds they invest in by some four percentage points a year, or more, according to an annual study by the research firm Dalbar.

Lance Roberts of Real Investments Advice provided his perspective in his post on Dalbar, 2016: Yes, You Still Suck At Investing (Tips For Advisors):

He also points out that:

The biggest reason for underperformance by investors who do participate in the financial markets over time is psychology. Behavioral biases that lead to poor investment decision-making is the single largest contributor to underperformance over time.

Unfortunately, between weak economic growth, stagnant incomes, rising costs of living and two major “bear” markets; nearly 80% of Americans simply are not able to participate as shown by numerous studies and statistical facts over the last few years: