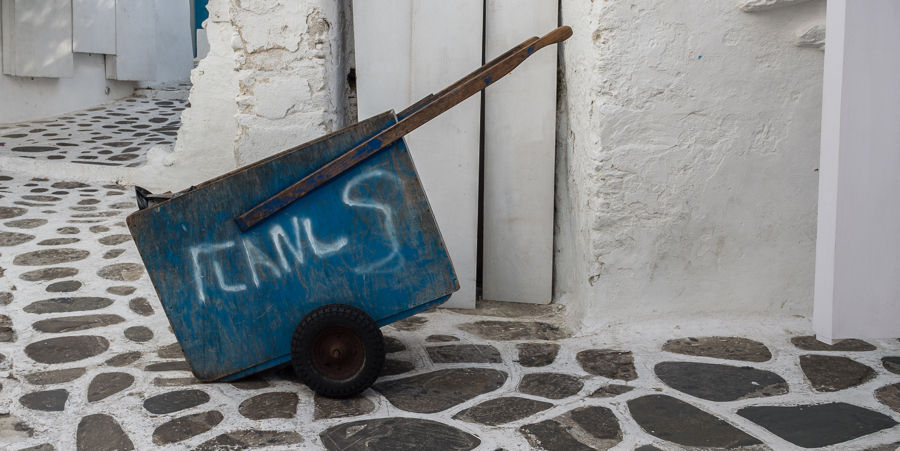 And we will definitely need a bigger bin than the one pictured above to get rid of all our junk.

Lorraine and I have made excellent progress in our decluttering efforts. We can actually see some floor space in our lower level garage. This area of our home was literally jammed full of boxes andÂ stuff. We have now broken the back of our clutter. I would say that about 60 percent of the stuff is ready for recycling or disposal. 30 percent we can give away. The last 10 percent can be sold.

We have a bin coming to the house today or tomorrow and we will begin the process of discarding stuff.

While we likely have another round or two of purging, most of the heavy lifting has now taken place. In the process, we have learned a few things.

The hardest part was getting started.

It really did look overwhelming at first. AÂ few hundred boxes and containers of stuff. And lots of items that had been moved into the space because we really didn’t know what to do with them. Things like old computers, old monitors, old DVD players. Honestly, it looked far, far worse than it really was.

Most unused stuff is junk.

And that is perhaps why it landed in that lower level garage. It was a convenient place to store stuff we no longer used but thought we might need one day.Â The rest of our home was in pretty good shape simply because we moved the unused stuff downstairs. A lot of our unused stuff was ready to be recycled and disposed. We just neverÂ dealt with it before.

Some stuff can be useful to someone else.

We had lots of opportunity to think about who might get some value out of some of our unused stuff. From family members, friends and people in need, we had things that could be of use to them. Books. Clothing. Unused furniture. We set those items aside for helping others.

It went much faster than expected.

The sorting process itself is pretty basic: dispose, recycle, donate, sell, keep. Most of what we had was ready for disposal and recycling. And what remained will be donated or sold. Sorting into piles went very quickly.

The brute force method is best.

Aside from books and papers, we tackled the messÂ all at once. One weekend. It will take more time obviously to be fully purged. A few evenings to fill the bin. A bit of time to donate stuff that can be reused. And selling whatever remains may take several weeks. That said, getting at the task and being focused on it for a few days really gave us a sense of accomplishment.

Finally dealing with all of this clutter createdÂ a sense ofÂ accomplishment. We needed to do this and it feels good to haveÂ it mostly done.