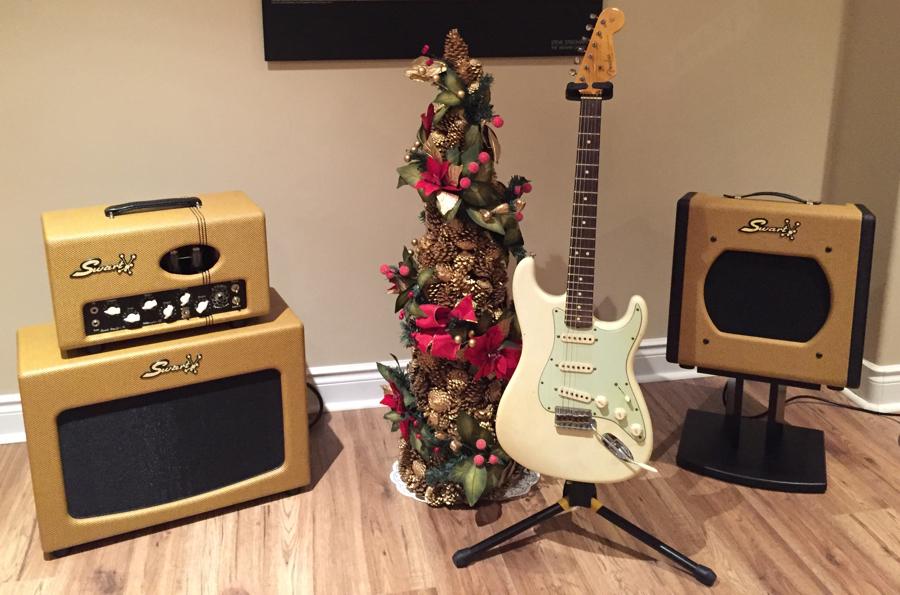 The Swart AST Mk II on the left was purchased back in May of 2010. Considered to be a low wattage amp — it produces about 20 watts — the Swart AST is an incredible sounding 6V6 tube amp.

The Swart STR Tremolo on the right is a recent purchase. It is a small combo amp and it produces only 5 watts through a 12-inch speaker. It is also an incredible sounding 6V6 tube amp.

Most of the time my amp will be mic’d and presented to the audience through the sound system. All I really need is enough monitor to hear my guitar. I don’t really need to hear the amp on the stage. In fact, I prefer to hear what the mic is hearing through the monitor. Small changes to the mic position on the amp can make a significant change to the overall sound.

In smaller rooms, I may not use a monitor at all. I just point the cabinet to my ear and hope that the mic is picking up the great tone.

I was asked if 5 watts was enough to get on top of a drummer. It is for the bands that I play in and for the type of music that I play. The Swart STR is a particularly loud 5 watt amp. And it breaks up at a much lower volume than the Swart AST Mk II.

I did have one issue with the new Swart though. And that was with the logo:

It looks as though the logo was bruised in transit. You can see the mark on the lower part of the letter “S”. I reached out to Swart to see if they could help me out.

And they will. They have a new logoÂ on its way.

Check them out here.

Global Music AwardsJoy To The World
Scroll to top