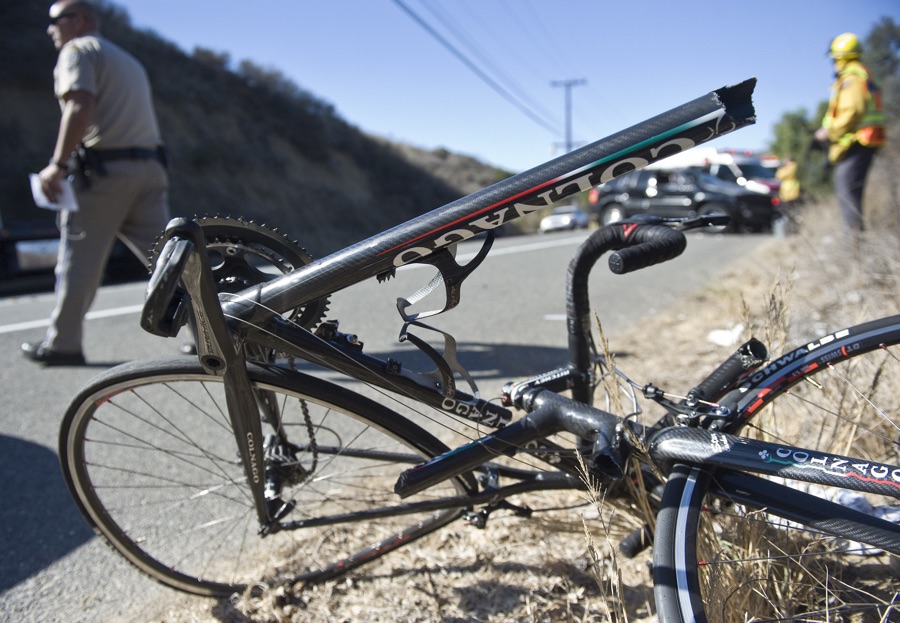 This cyclist was lucky. Although his Colnago was shattered, he survived a close encounter with a Jeep Cherokee.

Whenever I ride, I am very aware of my surroundings. And the possibility of a close encounter.

On Saturday, I did a long ride. I was coming back from a small town called Wilton, turning off County RoadÂ 6 onto Maple Road, just by Burt’s Greenhouse, north and west of Kingston. Roughly 30 kilometres from home.

An elderly driver made the turn from the opposite direction and he seemedÂ unable to share the road with me. He cut me off twice, the second time almost crushing me into one of the parked cars by the nursery.

My best move was to sprint out of his way. Fortunately I can sprint in excess of 45 kph and the elderly driver was well below that speed. I found a narrow slot beside him and sprinted away.

On Tuesday night, I did a short 30 kilometre ride. On the return leg, I was southbound on Howes road. This is a rural area where a lot of people have built homes in the country. It is a beautiful area to ride. Generally calm. Few cars.

My pace on this stretch of road can reach speeds between 35 and 45 kph. If I have a great tailwind, I will certainly be in the higher forties.

On a solo ride, that is a fast pace. If you hit something, or lose control of the bike, you are going to get hurt. Maybe even killed. So, my spidey sense was working overtime. I always stay really focused when I am on the road.

This type of cycling can be dangerous. Staying focused and anticipating danger is a definite requirement.

I could see, in the distance, two kids on bikes in the middle of the road. Unsupervised. No helmets.

In the province of Ontario, which is where I do most of my riding, bicycle helmets are mandatory for riders under the age of 18. I always wear a helmet when I ride. It could mean the difference between having a bad day and having a really, really bad day.

The two kids, without helmets, are circling the road, not paying any attention to oncoming traffic.

As I close in on the kids, I’m not sure what to do.

One of them sees me coming and, surprisingly, starts riding out to meet me on the road.

As I close in, the kid on my rightÂ abruptly turns around. I suspect he is going to try and race with me.

But what happened next could have ended very, very badly.

That kid makes a move to cut me off. And the other kid, who was stopped on the left side of the road does the same thing. Both kids trying to close my opening with their bikes.

I did not have time to do the math but I looked down quickly at my cycling computer: 42 kph. Distance to this improvised road block was now only ten to twenty metres away.

I won’t be able to stop in time.

I screamed in the loudest voice possible: “Watch Out! Watch Out!”

The kid that had tried to block my path on the right side reacted and heÂ swerved his bike to the right.

I literally brushed his arm as I went through this impromptu blockade.