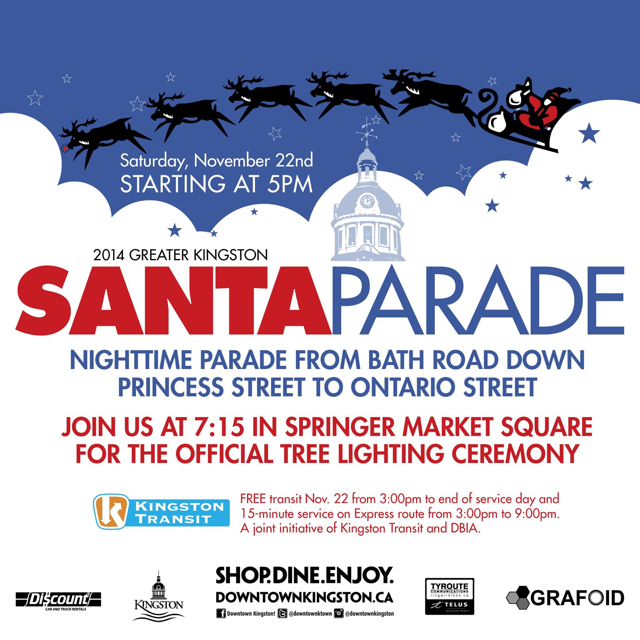 We were on the Rogers Media float again this year. Rob, Abby, Josh, Matthew and myself. We played Rockin”™ Around the Christmas Tree and Jingle Bell Rock over and over.

Thousands of people lined the streets of downtown Kingston. A very enthusiastic audience. A treat to be part of the event.

Although not as cold as last year ”” wind chills were minus 12 at the 2013 parade — there were plenty of challenges for the guitar player this year.

I used a Line 6 Pod HD500 modeller straight into the PA. No guitar amp. The Line 6 unit is a Â pedalboard design. I had it wrapped in clear plastic to hold off any rain. Much easier setup than trying to mic a guitar amp on a moving flatbed truck.

We rented a bass amp and a drumset for Josh and Matthew. Bass amp worked well. And the drumset was fine except every now and then a gust of wind would come through and blow the ride cymbal over. Matthew became quite adept at catching the cymbal in time. He never missed a beat.

I took out my American Fat Strat. Somewhat reluctantly I might add. I was going to use my Squier Telecaster ”” a Chinese-built student guitar ”” but the thing was buzzing like crazy so I left it behind.

Fortunately the weather stayed fairly clear. A bit of rain at the front of the parade and that made playing interesting. Fingers really slide on wet guitar strings. A first for me to play a soaking wet guitar.

Fingers were not quite as numb as last year. Still tricky to play outdoors in near freezing temperatures.

That said, the event was an incredible experience. So much fun.