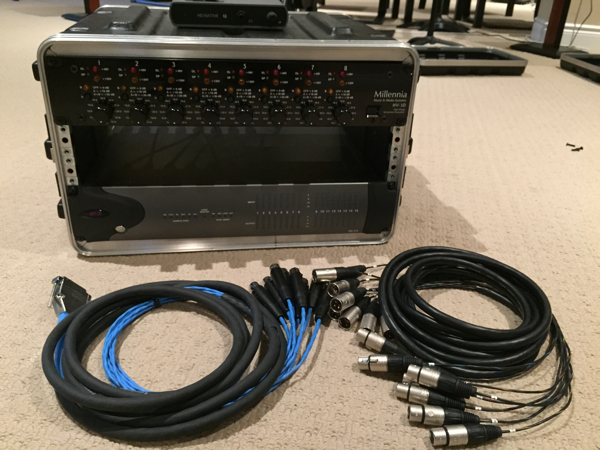 Trevor and his team will be introducing some of the material from the recently completed New World project at an event in Guelph this week-end. I was asked to do a remote recording of the event. At first glance, it should be pretty easy. Take a feed from somewhere, track it in something and then mix it.

The first challenge was getting signals to the multi-track recorder. I will be tracking 16 inputs for this event. The console takes a split feed from the stage. My preference is to use high quality preamps and bypass the console itself. The board is a Yamaha M7 — an okay desk but not configured with the analog output cards, only the omni outputs. But really, best to avoid those board preamps if I can. We will use the signals from the splitter.

Except that those feeds are going to be used for an Internet simulcast.

After a lot of discussion, we are renting another splitter and we will split the inputs at the console and I can feed the preamps. Good. That part should be easy. And I will find out on Saturday if it works.

I do not have a remote rig. I have a fixed install Pro Tools HD rig. And the last thing I want to do is take it all apart for a remote recording session. Fine. I will simply download Pro Tools HD to my MacBook Pro and use my iLok to run Pro Tools on the laptop.

Except that I run Mavericks on the MacBook Pro and Pro Tools 10 won’t run on Mavericks.

Okay. Fortunately there is a free 30-day trial for Pro Tools 11 HD and Pro Tools 11 will run on Mavericks. Spent two hours just getting this part done. Downloaded a massive file, installed Pro Tools 11 HD, updated the iLok account, activated the trial, connected the Thunderbolt HD Native interface and… nothing. The MacBook Pro doesn’t see the interface. No input or output from the HD IO audio interface.

After several hours, I finally went back to basics. Was I missing a driver perhaps? And that turned out to be the problem. I had to do a separate install of the HD interface driver to make things work. Downloaded that file, installed the driver and brought up Pro Tools 11 HD on the MacBook Pro.

Finally, after six or seven hours, I can see the input/outputs on the HD IO unit through the Thunderbolt HD Native interface.

I then spent another few hours getting the portable rig prepared.

If you look at the photo above, you can see the basic rack. It will hold two units of Millenia with 16 preamps total (I only have one in there right now). Those preamps will be connected to the Avid HD IO — a 16-channel audio interface driven by the laptop through the Thunderbolt HD Native interface. I will have an external Thunderbolt hard drive to capture the event data.

Removing the preamps and the HD unit from the studio racks was a two person task. Those units are heavy and getting them untangled and out of the racks wasn’t easy. Plus, I had to make sure that I could reconnect everything as the cable plant in the studio racks is a pretty busy place. Once racked, I had to get the cable plant arranged. Although a small portable rig, there are 16 lines from the splitter, 16 lines from the preamps and 16 lines for the audio interface. 48 connections not including the IO to the Thunderbolt HD Native interface and the IO from the computer to the external drive and not including power.

I also won’t have much time to get to the venue and get connected and calibrate signals. As long as I know the portable rack is operating then I only need to worry about interconnecting with the splitter feed. I’ll need a few hours to prepare the environment and then the actual event itself.

It won’t be as long a mix process as a studio recording. Â It will take time for me to rebuild and repatch the components that I removed from the studio. I will need to transfer the audio files into the studio Pro Tools environment. Then I will need to review the audio material, edit as required, mix tracks and send them out for review.

All in, I will be spend about 20-40 hours tracking andÂ mixingÂ this event.

Really looking forward to the event. It should be awesome.

Great to be at this point in the project.

I Get MailTDB Live
Scroll to top