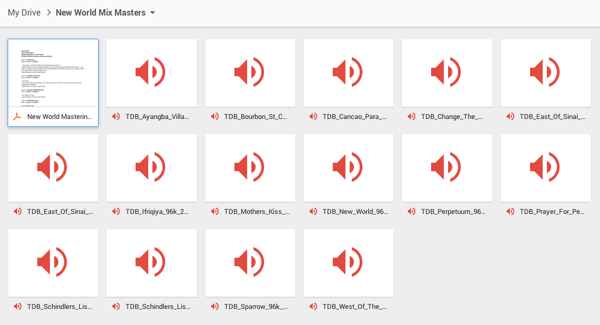 The mixes are finished.

WeÂ spent several hundred hours on the project tracking, editing and mixing over the past 15 months. And, after 5 rounds of mix release candidates, a few nagging questions began to emerge:

How do you know when a mix is finished? When can you let a project go?

Most of the heavy lifting on a recording project occurs through the editing process. It is in that stage of the recording process that I try to eliminate all of the issues in the tracks. With the New World project I had the benefit of six sets of ears which really helped to nail down all of the trouble spots. That can takeÂ time as some issues get resolved only for new ones to appear. With each iteration, the mixes were sounding better and better.

When a mix gets far enough along, it is important to set a deadline. By putting a specific deadline in place, it really confirms that the songs are ready to go and, if they aren’t, itÂ becomes obvious in the final sign-off reviews and a new deadline will get struck.

I provided the team with mix release candidates very early in the process. The first round mix release candidates were really little more than rough dubs. At this early stage, I focus my efforts on track processing over track mixing. Why? Because I know that I will get lots of feedback on issues related to editing and levels during the first round. It gives me a far better sense of where to take the mix onceÂ I get feedback from the team early in the mixing process.

Most songs will settle in after two or three mix release candidates. And a few will prove to be a bit more challenging.

Modern audio workstations really provide far too many options and, if you are not careful, you can become too distracted with trying to find that perfect compressor or effect. I tend to limit myself to a set of core tools — usually a few compressors and anÂ EQ. I also keep a core set of effects that I use for delays, reverbs and filters. We were looking for authentic, dynamic and musical sounds for this project and not highly processed, compressed sounds. If you want an open, musical sound, you do not need to compress the life out of the tracks and the main buss.

There are so many possible techniques and methods in modern mixing. At this stage I no longer put as much emphasis on tools and techniques as a proxy for experience. It takes time to develop the skills to deliver a great sounding mix. It is also obvious whenÂ a track has reached that threshold from average sounding to exceptional sounding. There may still be a few tweaks to get everyone happy with a mix but if things aren’t sounding great by then, a few tweaks will really not matter. Mixing is an art form and it is a technical process. Learn the mechanics well to focus on the art.

I listened to the mix masters one last time before sending them out to George. And they sound great. It may have taken several hundred hours of hard work to get them to this stage but there is a wonderful feeling of accomplishment when a team hasÂ really pushed hard and stretched and achieved an excellent outcome.

We should get the mastered tracks back before the end of September. I am so looking forward to hearing the final product.