The port of Kusadasi, Turkey was not quite what I expected. (Click on any photo for a larger image and slideshow). 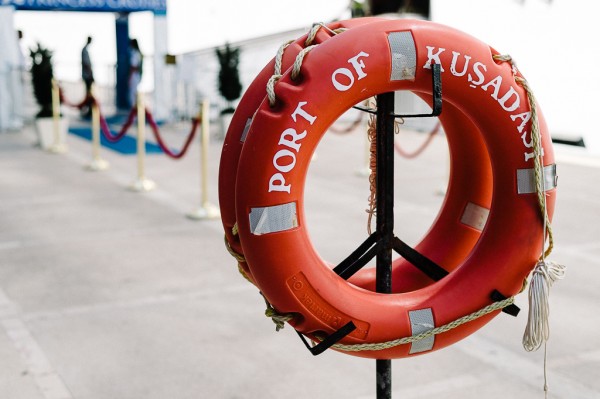 We arose at around 6:00am. Breakfast at Cabanas and down to Fathoms Deck 3 to queue for our bus. Like the previous day, we were in a bit of a race with a family that was bound and determined to get a seat up front. Didn’t matter as there were no front seats to be had. The seats were reserved for the tour guide and escort.

Upon disembarking the ship at around 8am, we were warmly greeted by our Turkish hosts. The greeting included a red carpet and dancers. There were numerous representatives from the tour operator and they also provided a warm welcome to Turkey.

The bus was very well equipped. A recent model Mercedes-Benz bus complete with wood trim on the seats. The tour operator also provided goodie bags with maps, souvenir items and wipes. Our tour guide was Sinaan. He had excellent English language skills. He was very friendly and very informative.

We made our way to Ephesus which was only about a 20-minute drive from the port of Kusadasi.

Ephesus is similar to Pompeii in that it is an active archeological site that is also open to tourists. Ephesus in certain respects is a far more impressive site. We had the opportunity to see the grounds as well as the SlopeÂ Houses.

The ancient city of Ephesus was one of the great cities of the Greeks in Asia Minor and home to the Temple of Artemis, one of the Seven Wonders of the World. Today, the ruins of Ephesus are a major tourist attraction, especially for tourists on Mediterranean cruises. Ephesus is a sacred site for Christians due to its association with several biblical figures, including Paul, John and Mary. 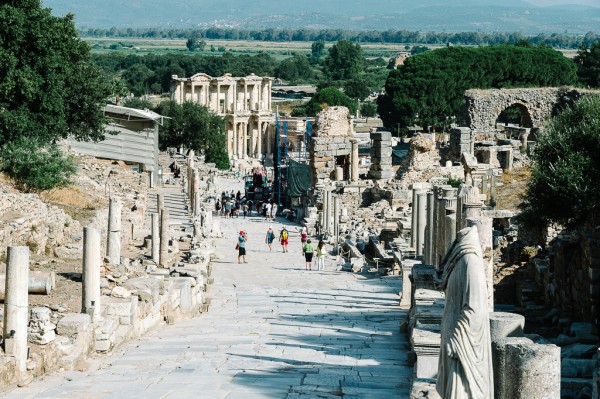 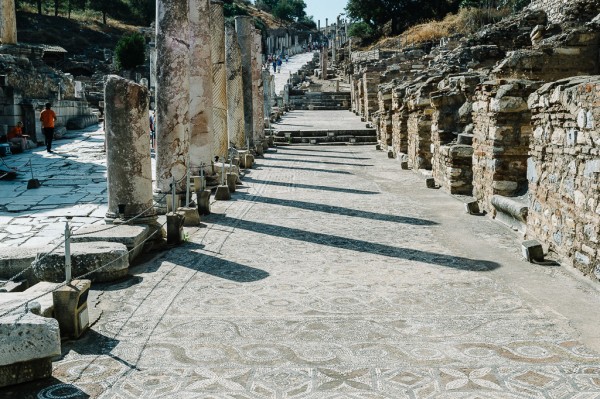 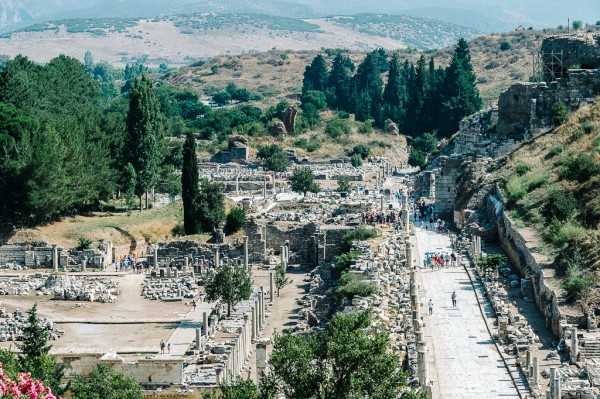 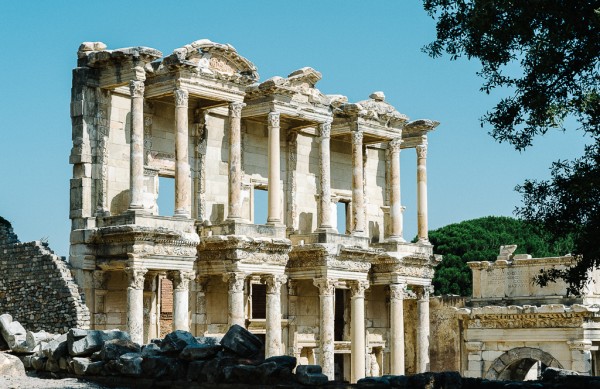 One of the highlights was climbing the stairs of the Great Theatre of Ephesus — an outdoor arena that could hold up to 25,000 people.

In the 1st century AD, Paul spent over three years in Ephesus preaching the Gospel. According to tradition, he delivered a sermon condemning pagan worship in this theatre. And according to the Acts 19:23-41, the theatre was the site of the riot of the silversmiths in which those who made silver figures of Artemis rioted because Paul’s preaching was bad for business.

Construction of the Great Theatre of Ephesus may have begun during Hellenistic times: Lysimachus (d.281 BC) is traditionally credited with building the theatre, but so far there is no archaeological evidence for its existence before 100 BC. However, Lysimachus may have chosen the building site and begun the preparation of the site, a process that required 60 years of digging in the mountainside. Yes. 60 years of digging.

A small Hellenistic theatre was probably built here around 200 BC, but the theatre seen today dates almost exclusively from Roman times. Constructed primarily in the 1st century (beginning about 40 AD), it was expanded periodically and used continuously until the 5th century.

Earthquakes damaged the theatre in the 4th century, after which it was only partially repaired. By the 8th century, the theatre was incorporated into the city defense system.

Sinaan: I was listening to all of your commentary during the tour.

Up I climbed to the very top of the stadium. If you look down and just to the right, you can see Matthew in the red hat and shirt. He didn’t make it all the way to the top. 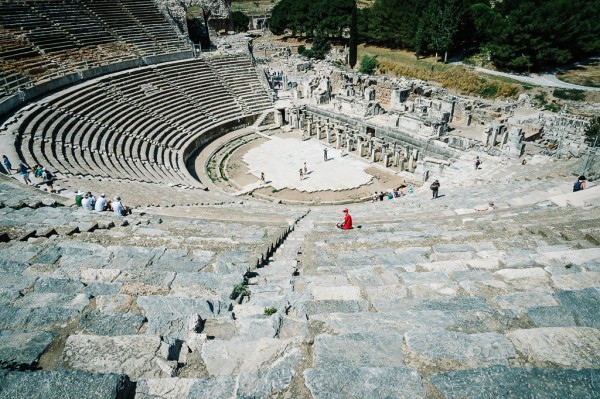 Another highlight was the Library of Celsus. 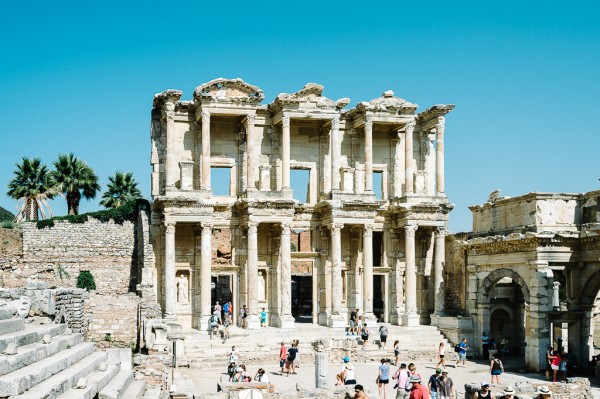 And I also have to highlight the Slope Houses.

The Slope Houses were used from the 1st century to 7th century, and then were abandoned. Around this time, after the devastating Arab raids and the continued silting up of the harbor, the remaining inhabitants of Ephesus moved to Ayasuluk hill (near the Basilica of St. John). After being abandoned, the Slope Houses gradually fell into decay. However, a number of them were filled with soil from landslips, which preserved them and their contents.

The Slope Houses are still being excavated and are sometimes covered by a tent, but are usually open to the public. They can be reached by a flight of steep steps from Curetes Street. The ruins have been divided by archaeologists into Slope House 1 (south) and Slope House 2 (north, closer to the Library). Each house had three stories, running water, heating, and an atrium with an entrance onto the side street. We were able to tour the Slope Houses. 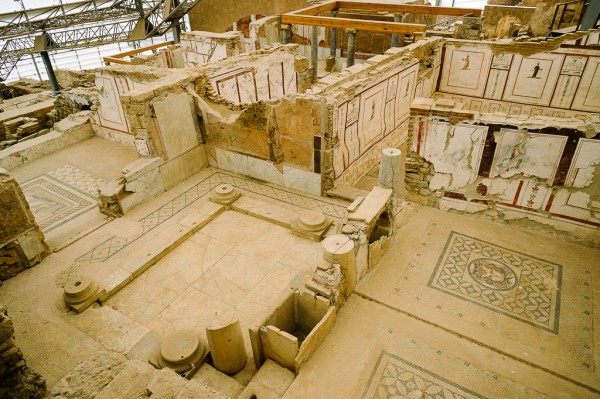 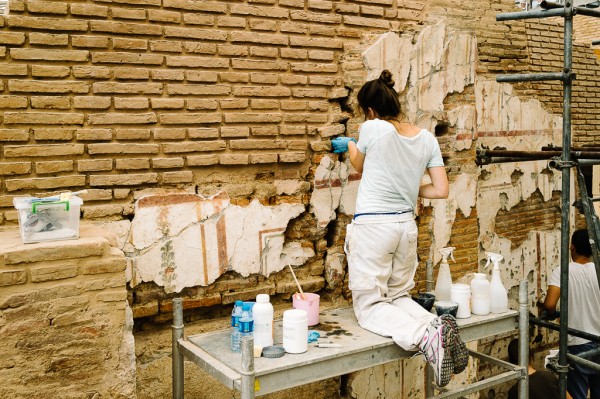 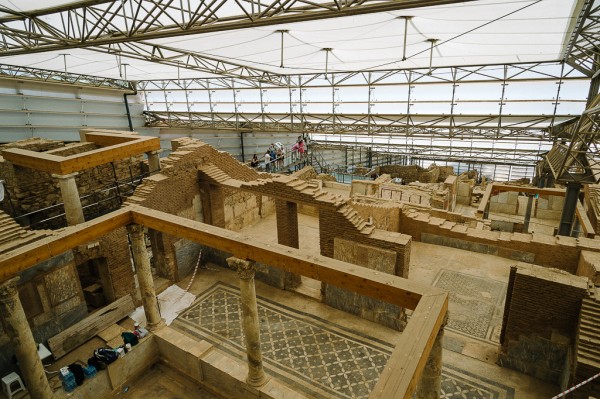 We did have a couple of forced stops. One at a shopping plaza where we tasted Turkish delights and we bought a magnet. We viewed a short presentation that seemed to recreate a gladiator battle. Not sure why. 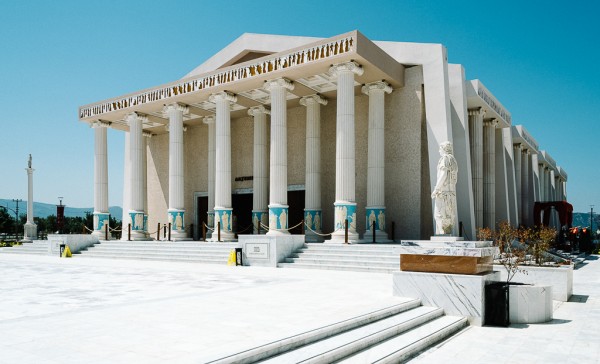 But the forced stop only lasted 20 minutes or so and then we were on our way back to port. The second forced stop was a hard sell on Turkish carpets. But we avoided that stop and simply walked away. We did go back to the ship but since we were still in port, we decided to go back out and walk around Kusadasi. And I am glad that we did. We went through the Grand Bazaar in the old town. My, oh my. Those streets vendors are very aggressive. Matthew and I had our Canada caps on and all we heard was “Canada, come and spend your money!” 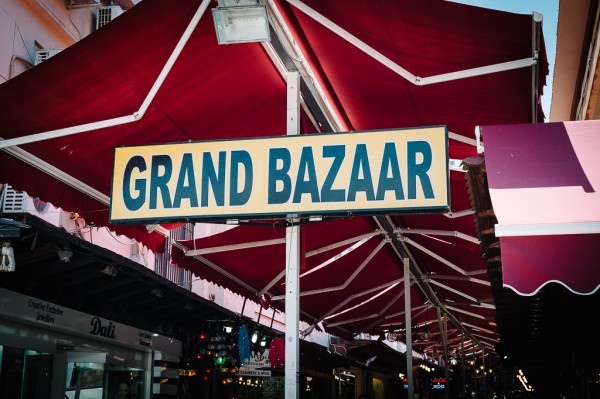 English was everywhere in the Grand Bazaar. But it looks like Miller had a problem with the Cafe Center’s umbrella. 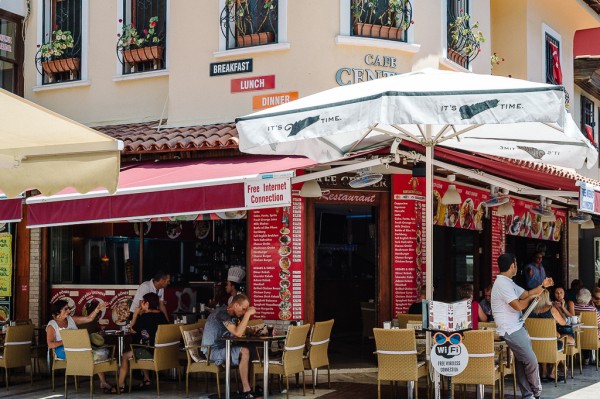 You could not pass any restaurant or storefront without being accosted. 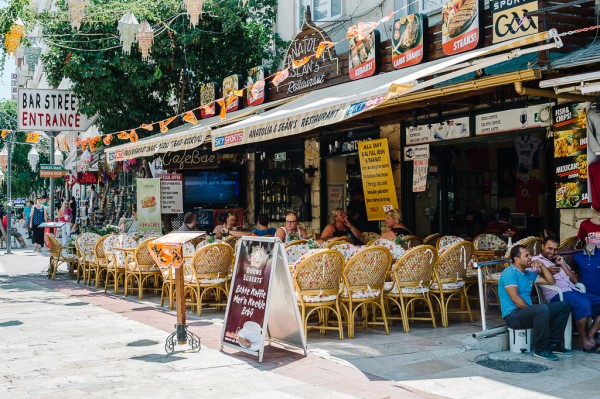 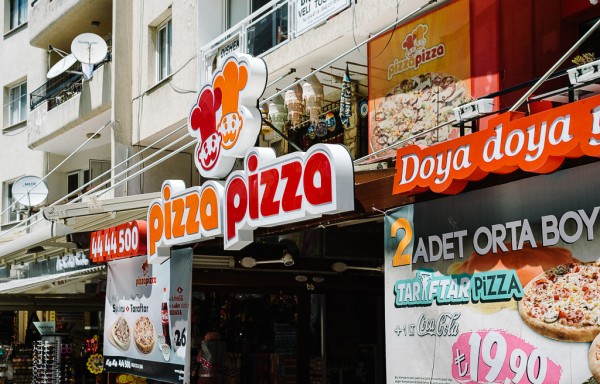 Only 1 Euro for an orange juice. The bottled water was far more expensive here. 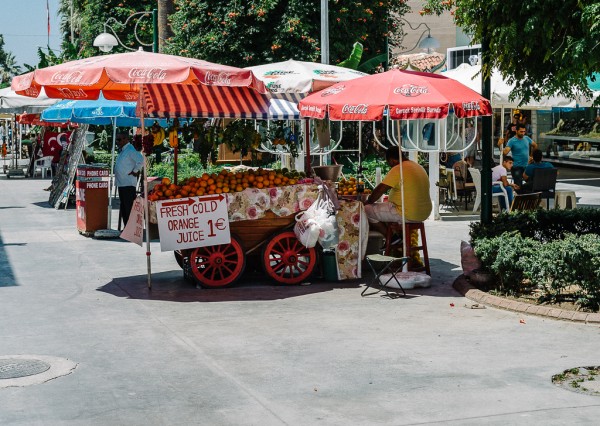 Coloured stairs led away from the Grand Bazaar. 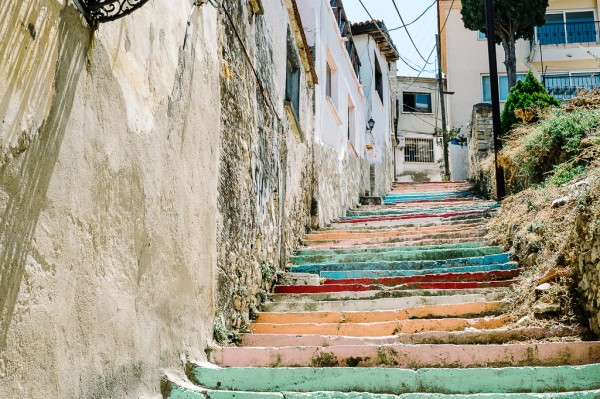 Although the vendors were very aggressive, the Grand Bazaar wasÂ an interesting experience and I don’t think I have seen a bazaar like this one anytime before in my life. 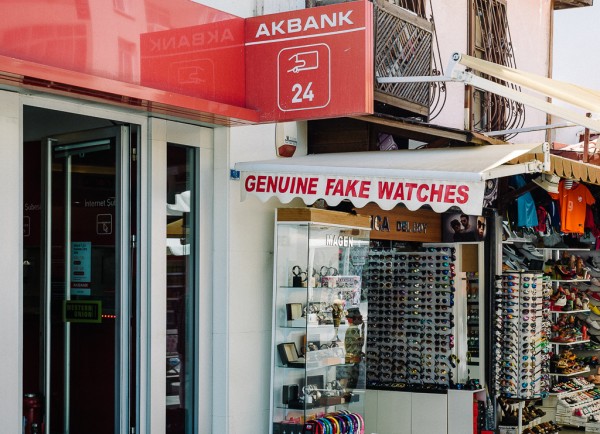 Waffles or ice cream cones? I did not see any waffles. Apart from the signs. Perhaps these were genuine fake waffles? 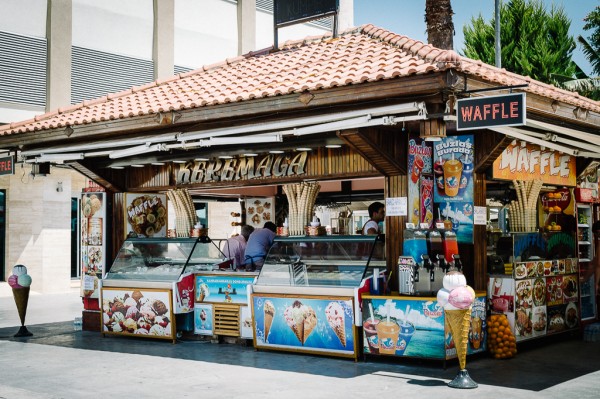 There were literally hundreds of souvenir stalls in the Grand Bazaar with street vendors ready to pounce from chairs or from the shadows. 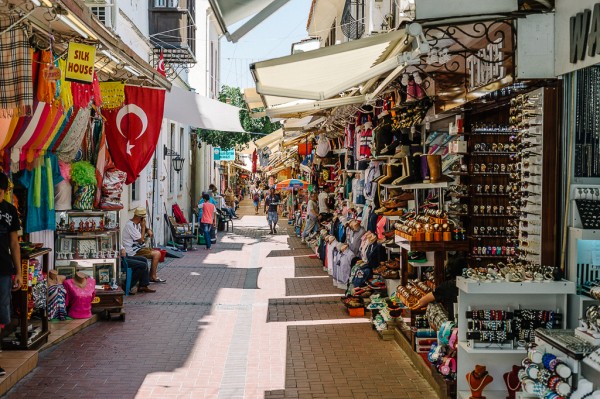 The ship left port at around 5:00pm. Calm waters. Warm temperatures. I had to encourage Lorraine and Matthew to stop standing in front of the ship so that we could get going. I mean, do people normally just stop in front of a ship like that? 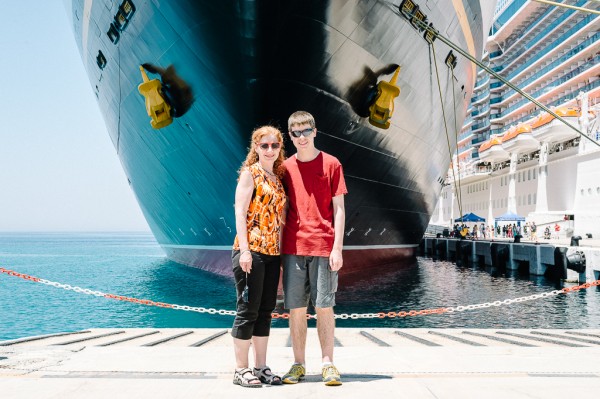 We had our dinner at Lumiere’s.

Lorraine went to see a Disney production in the main theatre. Matthew went to Vibe. I went to the couch.