We arrived at the port of Piraeus, Greece.

Early morning breakfast to get ready for our excursion at about 8:15am. This was our longest excursion at around 8 hours. Due to a somewhat aggressive exercise session from the previous day, I had successfully managed to wreck my back and I was in a fair amount of pain. Fortunately we were on a well equipped Mercedes bus seated near the front. Click on any image for a larger photo and slideshow. 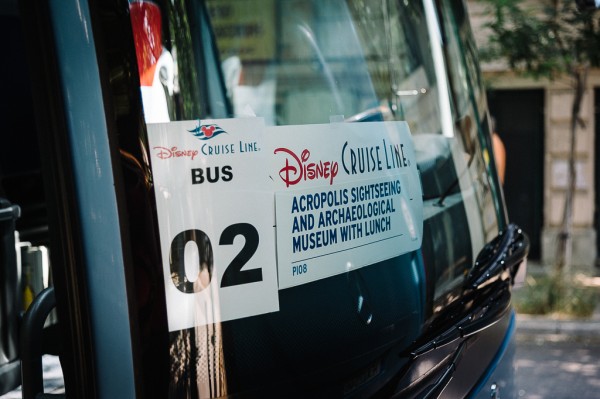 Our tour guide was Penny and she took us through the highlights of the port of Piraeus which turned to be three ports in one. A port for the cruise ships, a port for the super yachts and a port for the freighters.

Athens appeared to be quite run down. And our guide continually referred to the financial chaos that had engulfed Greece. Many of the nicer areas of the city were actually still under duress with depressed real estate values and, in some cases, abandoned properties. The super yachts were also not immune.

Our first stop was at the newer stadium that was built in Athens to celebrate the history of the games. Whereas yesterday we walked the very first Olympic stadium in history, today we were able to view the Panathenaic stadium in Greece. 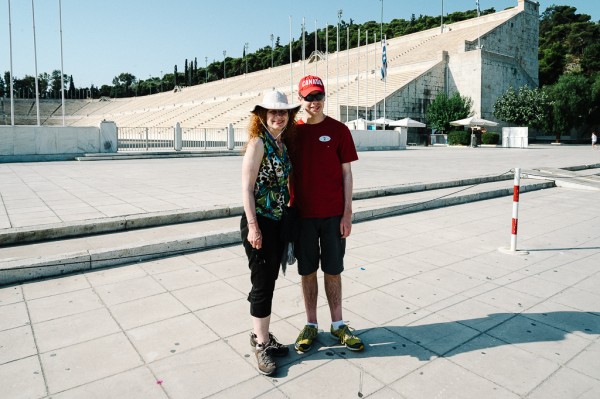 We drove around Athens and made our way to the National Archeological Museum.

The museum tour began at a rather slow pace. The guide seemed to be spending an inordinate amount of time providing a history lesson about the earliest burial protocols from several thousand years ago.

However, things picked up as we started to move through the museum and then it became clear that there was a lot to see here. Unfortunately, we could only spend about 90 minutes. We had roughly 20 minutes of free time and one of the museum guides directed us to the second floor to view the vases and frescoes. Very impressive exhibits. 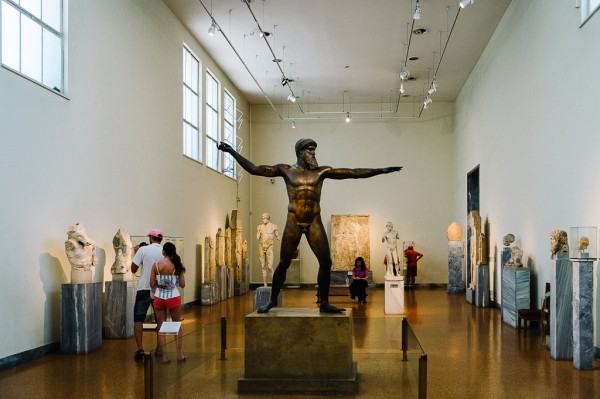 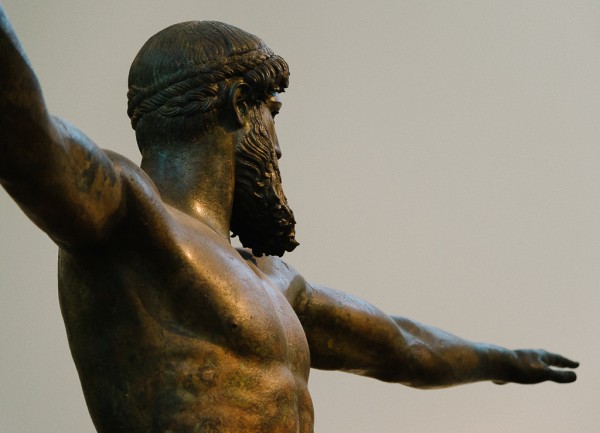 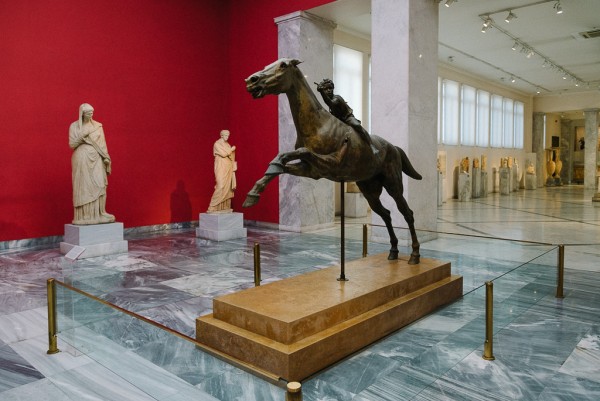 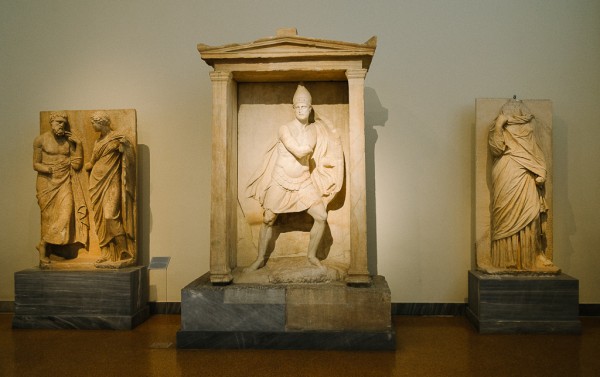 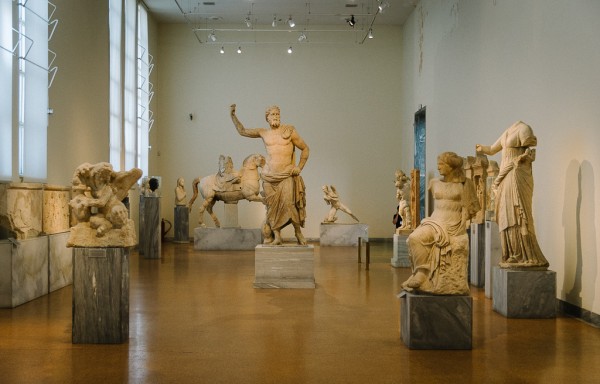 There were a number of artists in the museum busily at work. 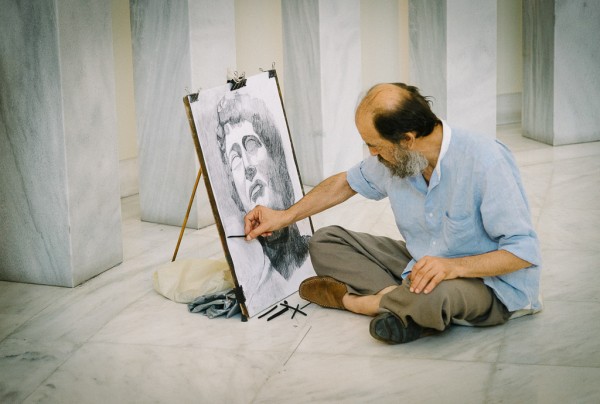 We returned to the bus and waited for a family that apparently did not get the memo to meet back at the bus for 11:00am. They finally arrived about 10 minutes late which I guess was fun for them as they were viewing the museum artefacts whereas those of us in the bus could only take in the bus seats. Although the bus seats were nice. But not that nice.

Our next step was the Acropolis. It was very hot and crowded however viewing the theatre area as well as the three temples was awesome. 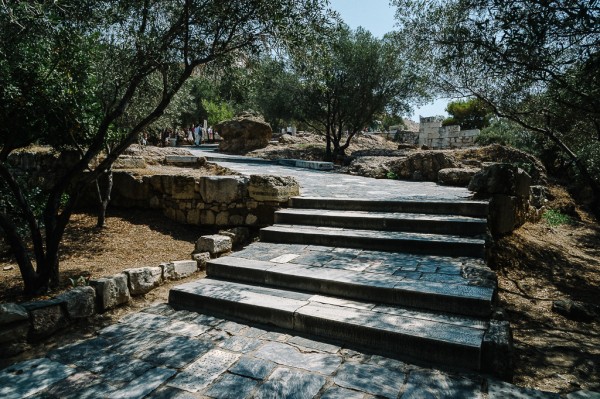 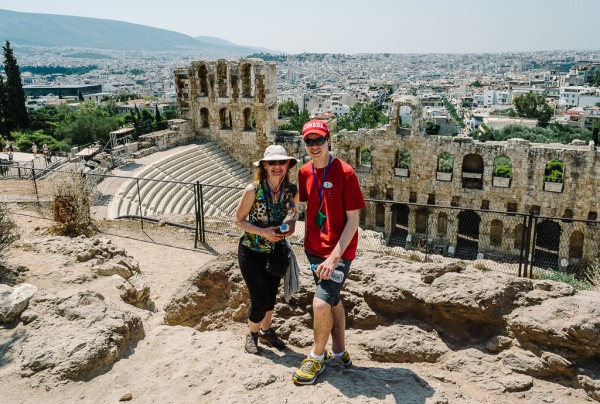 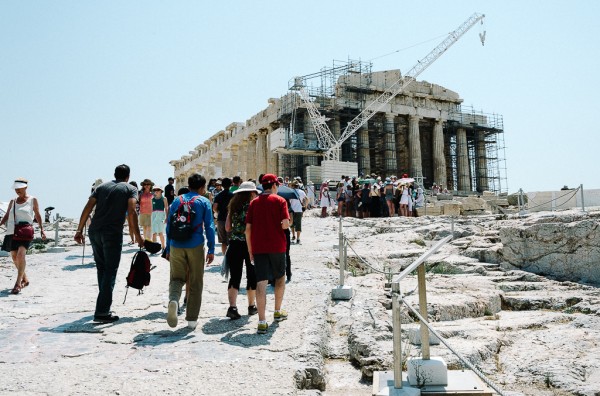 The Acropolis, and the Parthenon in particular, is the most characteristic monument of the ancient Greek civilisation. It continues to stand as a symbol in many ways: it is the symbol of democracy and the Greek civilisation. It also symbolises the beginning of the Western civilisation and stands as the icon of European culture. The Parthenon was dedicated to Athena Parthenos, the patron goddess of the city of Athens and goddess of wisdom. It was built under the instructions of Pericles, the political leader of Athens in the 5th century BC. The Parthenon was constructed between 447 and 438 BC and its sculptural decoration was completed in 432 BC. In 1987 it was inscribed as a World Heritage Site (UNESCO, 1987). Uniquely, capturing the gravity of the Athenian Acropolis as a symbol, UNESCO recognises that “[…] the Acropolis, the site of four of the greatest masterpieces of classical Greek art ”“ the Parthenon, the Propylaea, the Erechtheum and the Temple of Athena Nike ”“ can be seen as symbolizing the idea of world heritage” (UNESCO, 2006). 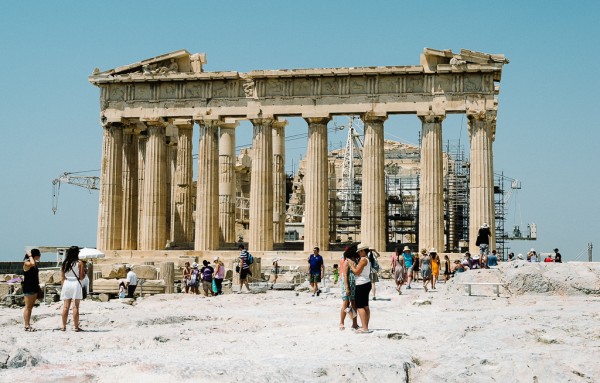 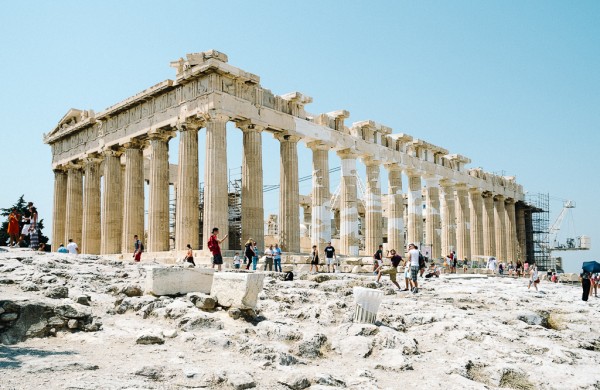 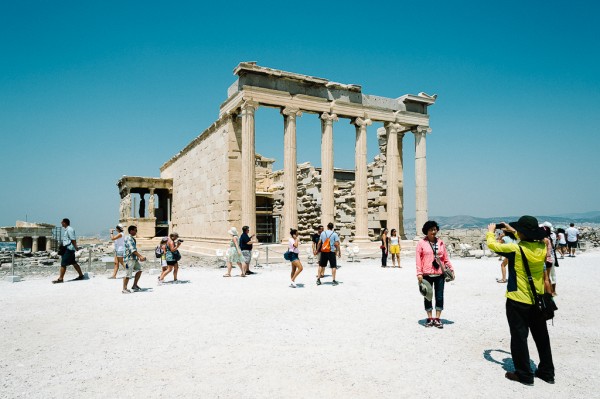 Being on a high elevation offered remarkable views of Athens. 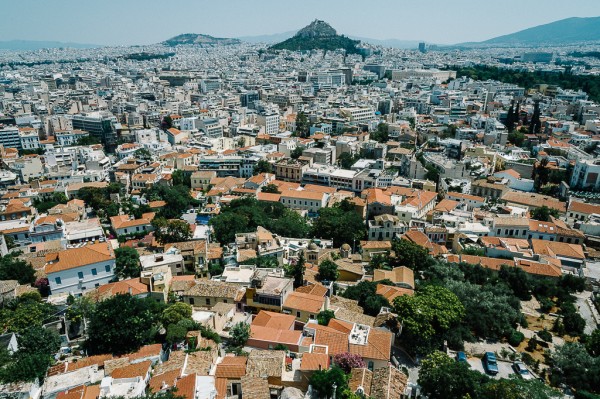 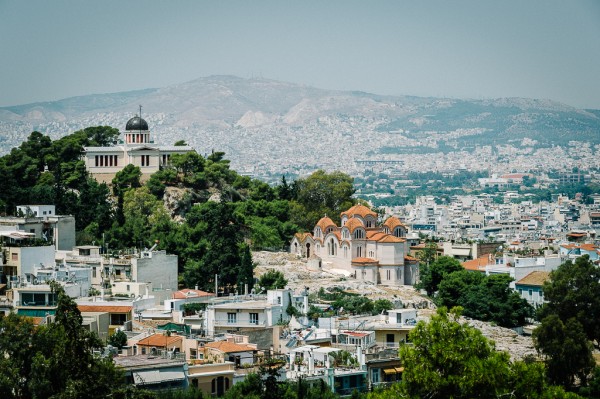 We had the opportunity to walk up to Mars Hill where Paul had preached many years before. 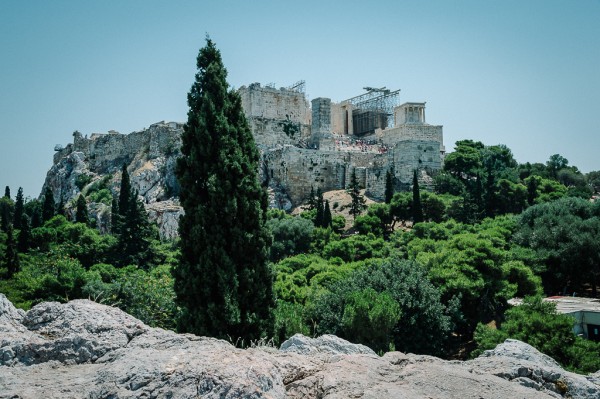 After the Acropolis, we made our way to the Plaka district for an authentic Greek Souvlaki lunch. I had never eaten souvlaki before and it wasn’t too bad. The restaurant was a bit like family dining in that we were crowded with our tour partners and the food came as shared plates for the most part.

When we finished our lunch, we had the opportunity to shop in the Plaka neighbourhood which turned out to be a bit rough for an apparently upscale area. This is literally what part of the shopping district looked like: 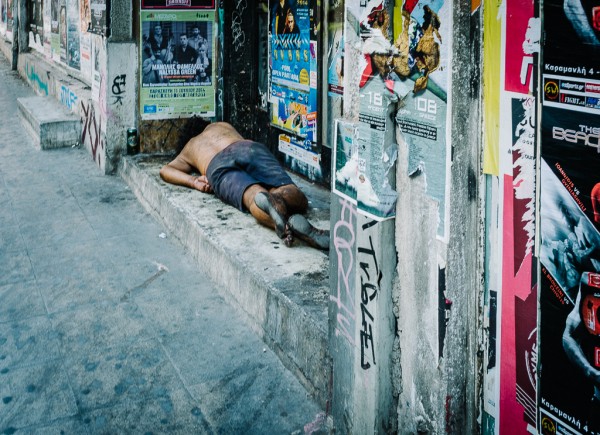 Rough enough that I felt a bit uncomfortable so we did not venture too far from the main shopping area. It did include a bazaar style avenue complete with aggressive restaurant staff that tried to get us to eat more food at their tables. 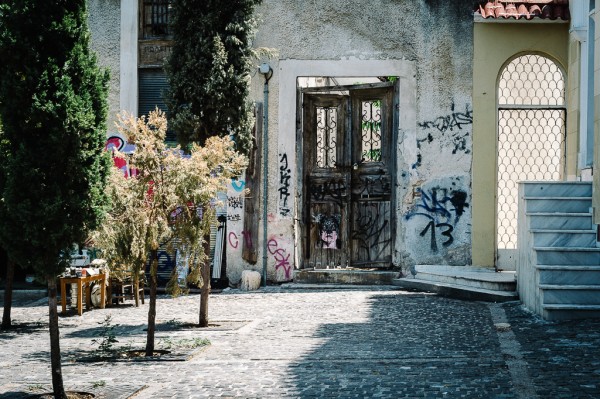 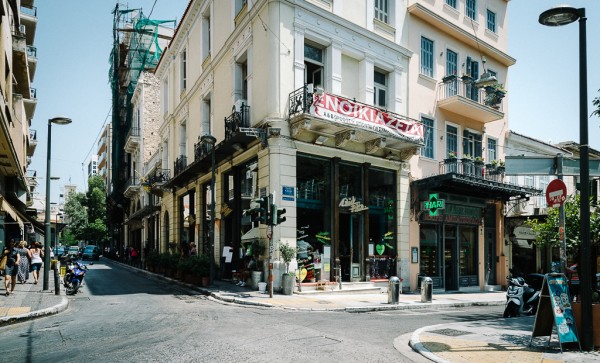 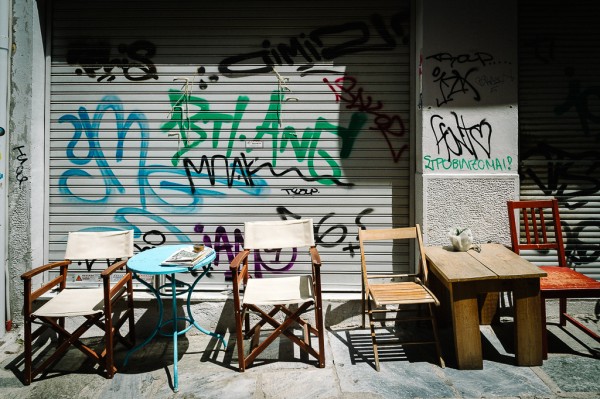 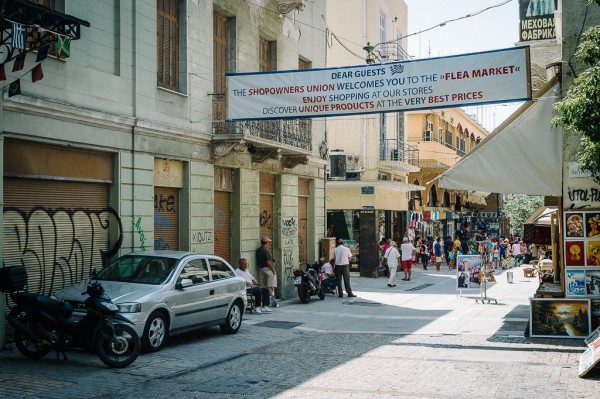 We did enjoy some gelatos at an open square. 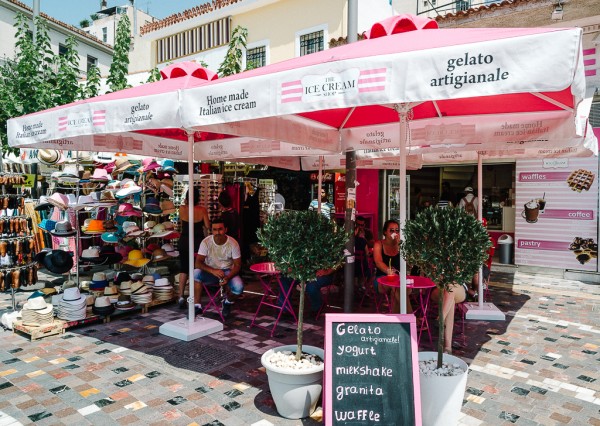 We did note that the outdoor temperature had reached 40 degrees Celsius. It was a dry heat.