Monday, July 7th. Katakolon was our first port of call in our cruise. It is a very small town of about 600 people. And, as far as I could tell, it exists primarily to host the cruise ships. As we pulled into Katakolon, there was another cruise ship of about 3,000 passengers. In just a few minutes, the population of the town was going to grow from 600 people to 6,000 people.

First sighting of Greece from our stateroom. Click on any image for a larger photo and slideshow. 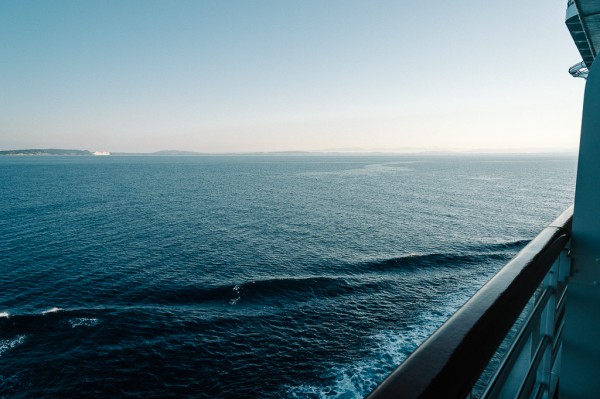 The port of Katakolon already had another large cruise ship. Thousands of tourists were about to descend on this tiny town. 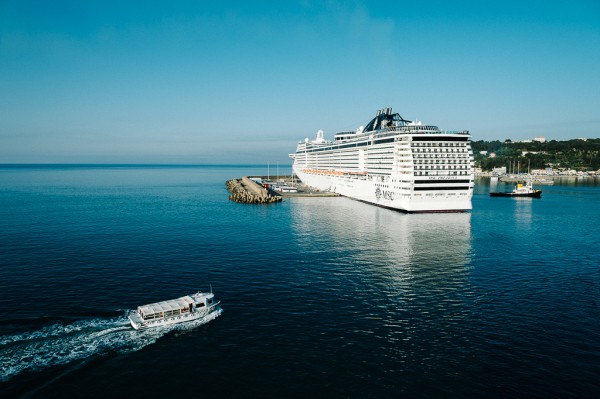 We boarded a bus that would take us to Olympia. There was a guide of sorts whose name was Ior. She provided a bit of background on Katakolon and a little bit of context for Olympia.

That said, the grounds of Olympia are readily viewed on your own. We had to purchase our tickets which required a brief wait at the gate. It was a very hot day and we were mindful about staying hydrated. 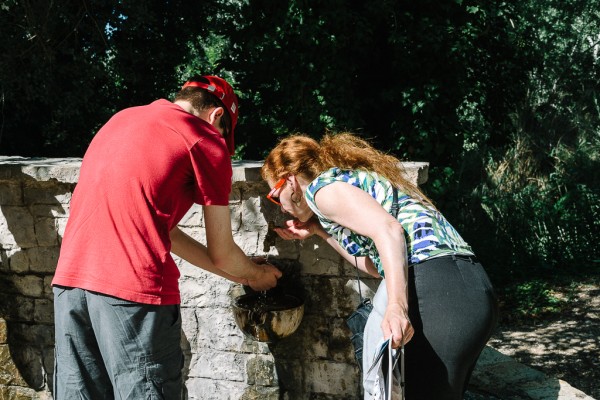 As you can tell from the photo, OlympiaÂ does attract a few visitors. I suspect that most came from the cruise ships. 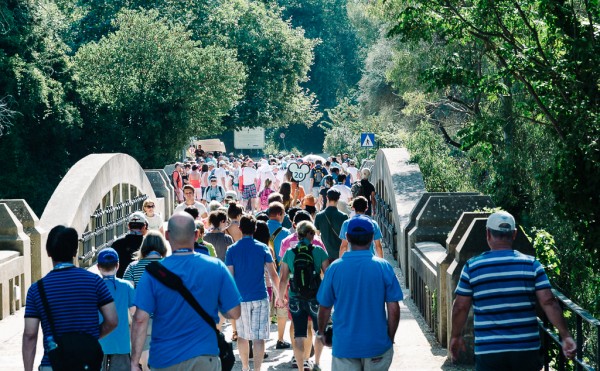 Passing through the gates was like passing through time. Structures that had been built for the original Olympic games circa 600 BC were still standing. Not in their original state but as various columns, walls and, as one tour guide put it, rocks on the ground. It was quite a sight to see the ancient grounds. 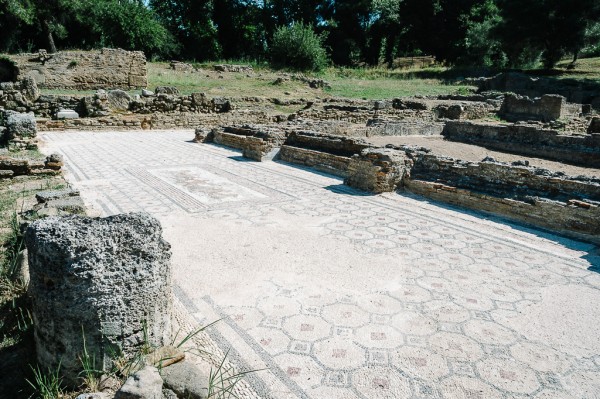 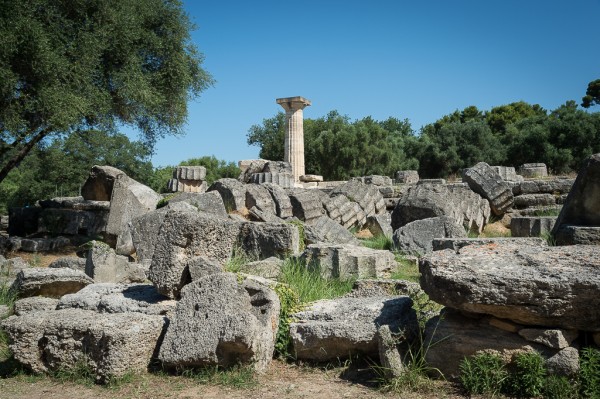 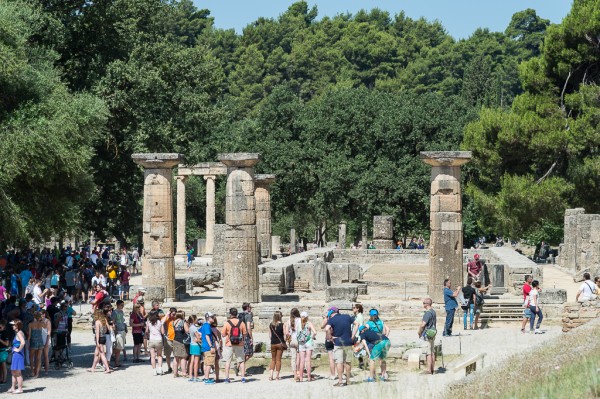 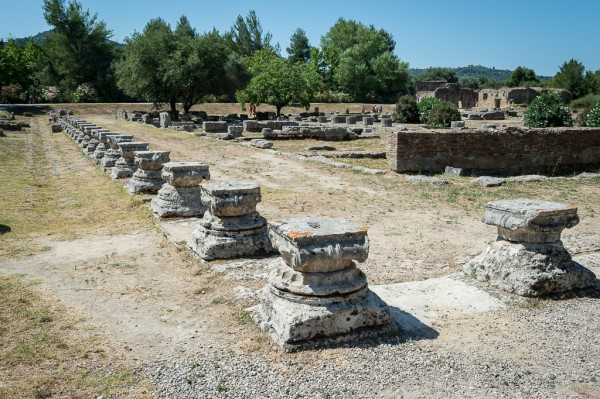 I learned a few things about Olympia. The area was inhabited in the beginning of the second millenium BC.

Tradition holds that the first Olympic Games were held in 776BC, but they might actually have started way before then. The games were a peace treaty between Sparta and Elis, and it was decided that all Greek states could take part in them as long as they respected the sacred truce that must be held during the games. This period of peace was for a month at first, but because so many states took part and people from all over came to watch, it was extended to three months, always during summer.

Because the sacred truce gave the kings and leaders from all over Greece a chance to meet unarmed, Olympia became an important place for political discussions and trade. It also enhanced the feeling of unity amongst the Greeks, along with the language and religion.

Olympia was to be renovated many times, and new buildings were added through the ages. Famous people came here to watch the games, such and Plato and Aristotle.

Slaves and women, especially married ones, were strictly forbidden to watch the games, and if a woman was caught as a spectator, she was immediately thrown off Mt. Typaeon.Women were allowed to compete.

Barbarians were allowed to watch, but not to compete. A competitor had to be a free, unpunished Greek and he had to have trained for the games in his home for ten months, and for one month in Olympia. The winners did not receive any money, but were greatly honored. The prize was an olive wreath from Zeus holy tree, and the winner was allowed to raise a victory statue.

We went out the the old stadium and walked the start and stop markers that were used for the original games. It was a tad to warm to be sprinting although we did see some people race from the blocks. 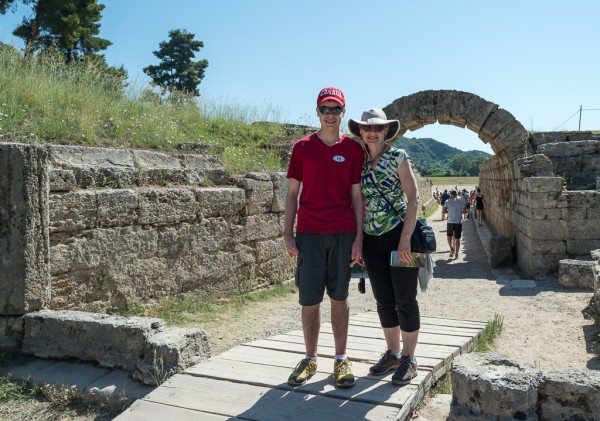 In this completely candid shot without any prompting from me, Lorraine and Matthew decided to sprint from the original stone blocks of the stadium. 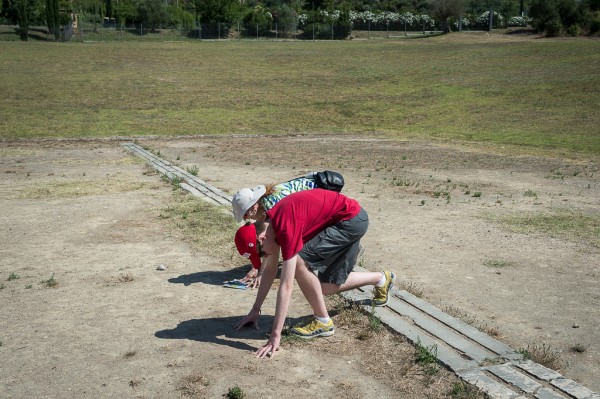 The crowds were not so bad once we got on the grounds. Here is a birds-eye view of the stadium. The track itself is 212.54 m long and 28.5 m wide, at least according to my precise measurements. 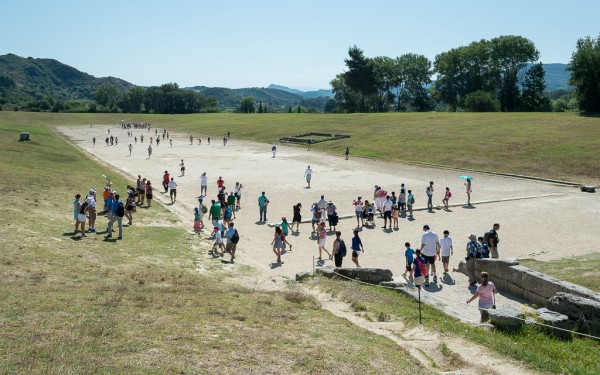 We were able to get through the grounds in about an hour or so and then we made our way to the Olympus Archeological Museum. The museum was nice. Somewhat small. But air conditioned. And a number of interesting artefacts that helped to reinforce the history of the region. Here is one example. 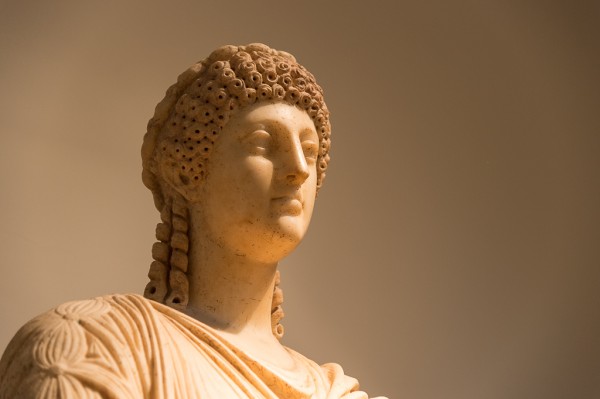 Matthew takes a break on the steps just outside the Archaeological Museum of Olympia. It was a very hot day and we did a lot of walking on the ancient grounds. Both Matthew and I wore our Canada hats. As a consequence, we met many Canadians. Generally, they would engage us by saying something like: “Hey, are you from Canada?” 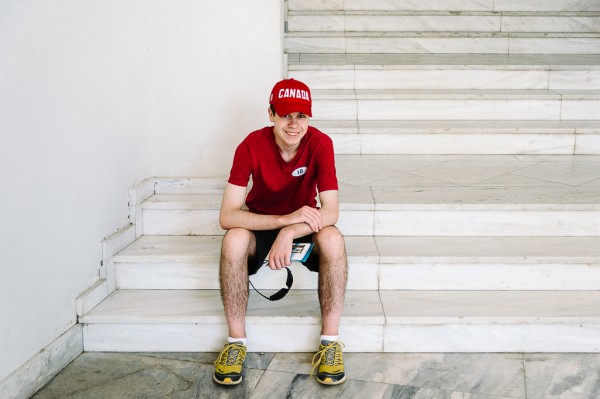 We walked back to the small village of Olympus to wait for our bus. It was a good first port excursion as it was not too long a session. We were still adjusting to the time zone changes and the hot weather.

Lorraine and I dropped Matthew off on the ship and made our way back to the small town of Katakolon. The first thing you see when disembarking the ship is a small tourist information booth. It was not open. 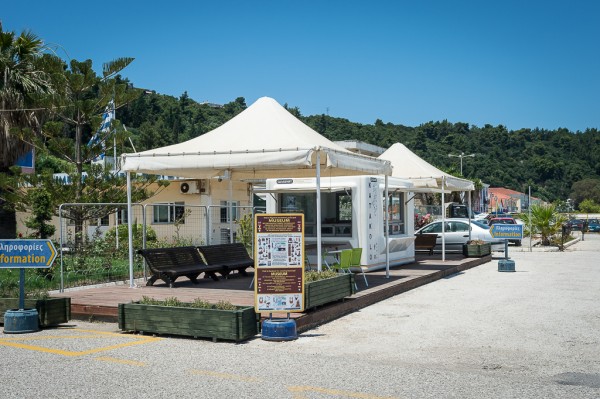 The main dock building was in a bit of a state of disrepair. 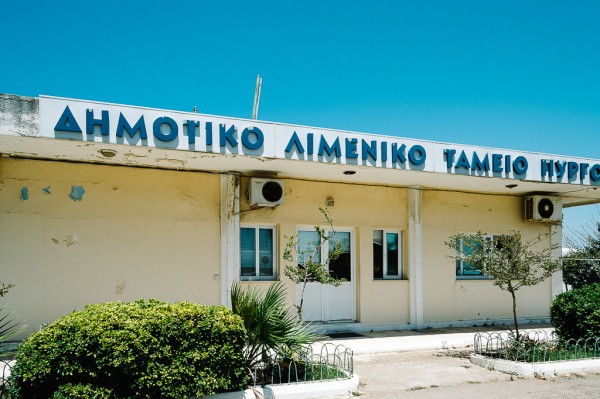 The main street of Katakolon is only a few hundred metres in length. And most of the buildings are small shops. 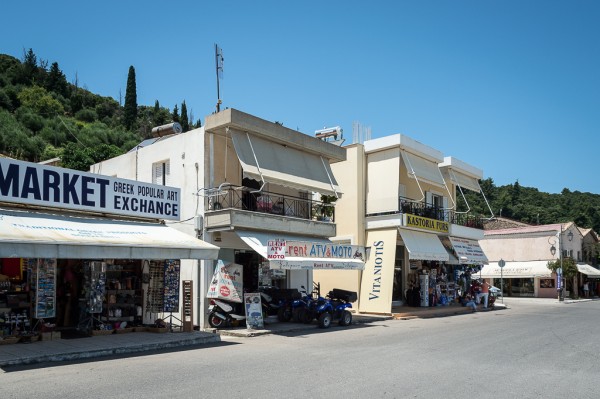 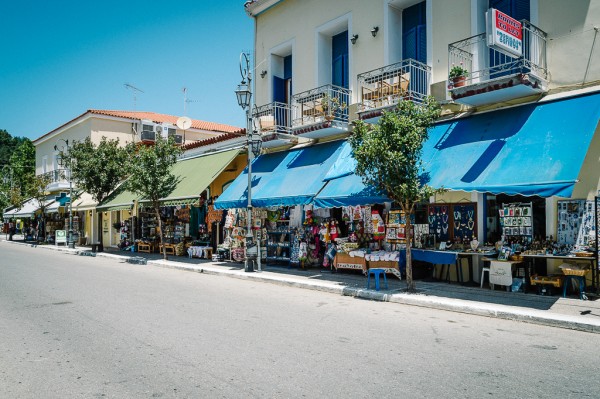 The dockside area had a number of gift shops under tents. 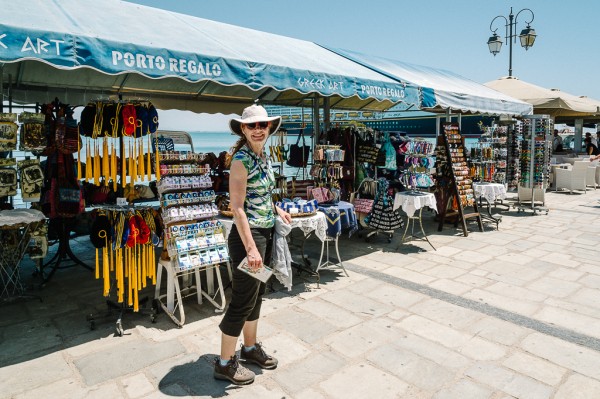 The dock area provided a nice view of the Disney Magic. 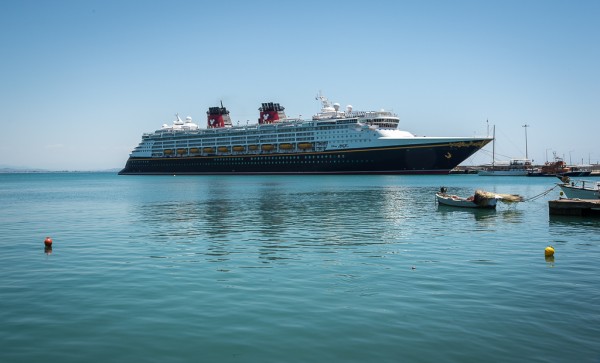 At SeaAthens
Scroll to top