We voted last night. And the electorate of Ontario provided the provincial Liberals with a majority.

I was disappointed with the outcome of the election and my son was concerned with my reaction. I shared with him a few of my thoughts.

A government that we can afford does not look like this:

Neither approach is sustainable.

Hiking taxes on the top income earners of the province really doesn’t accomplish very much. With a budget deficit of roughly $12 billion and total debt of $300 billion, the $300 – 600 million revenue uplift is insignificant and will do littleÂ to deal with the financial challenges that face the province.

Increased spending can only be achieved through increased debt. Looking at the basic net-debt to GDP ratios, Ontario’s ability to raise money through debt offerings will become increasingly more expensive particularly if interest rates go up. 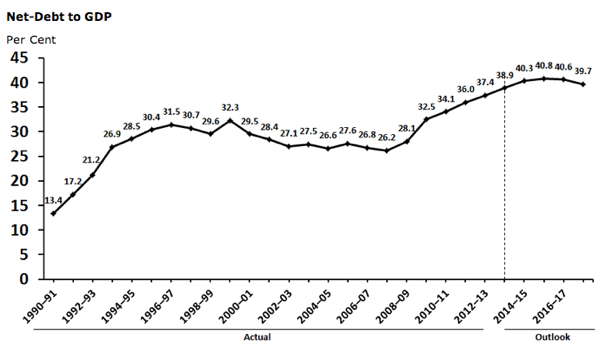 When Drummond filed his report back in 2012, he offered these words to the Ontario government:

Ontario faces two serious fiscal challenges. The first is to get out of the current large deficit. This will take many years, but the task does not end there. It goes almost without saying that every effort must be made to bolster future economic growth rates, and much has been done in that regard, such as reinvesting in education and reforming the tax system. But with a looming slowdown in the expansion of the labour force that is almost upon us and with the province”™s weak productivity growth of late, Ontario cannot count on a resumption of its historical strong growth rates. This means that the sharp degree of fiscal restraint needed over the next few years to eliminate the deficit may see a point of some reprieve, but not much. Spending simply cannot return to recent trends.

But perhaps his most telling comment in his report to the government:

The newly elected governmentÂ will reintroduce the Liberal budget within 20 days. I have no idea how they intend to carry out such a fiscal plan given the reality of Ontario’s financial situation. Here are the highlights of their fiscal plan:

– create a 10-year $2.5 billion Jobs and Prosperity Fund to partner with industries poised for growth. Measures include $10 million for a nine-month paid community work and service program to help graduating high school students, and $5 million in grants for the next two years for new small-scale manufacturers.

– invest $15 billion in transit projects in the Greater Toronto and Hamilton area, including the electrification of GO Transit commuter trains and a downtown Toronto subway relief line.

– invest $14 billion in roads, bridges, highways and other transit projects outside the GTHA, including $1 billion to support the development of the Ring of Fire in northern Ontario, with or without financial help from the Harper government.

– provide up to $230 million to expand access to natural gas in under-served communities, including agricultural communities.

– create an Ontario retirement pension plan which could be integrated into a CPP expansion in the future.

– guarantee that every Ontarian has access to a primary care provider.

– continue to expand the scope of practice for nurses and pharmacists.

– continue the 30 per cent off tuition grant for post secondary education.

Use Your Head Vanhawks Valour
Scroll to top