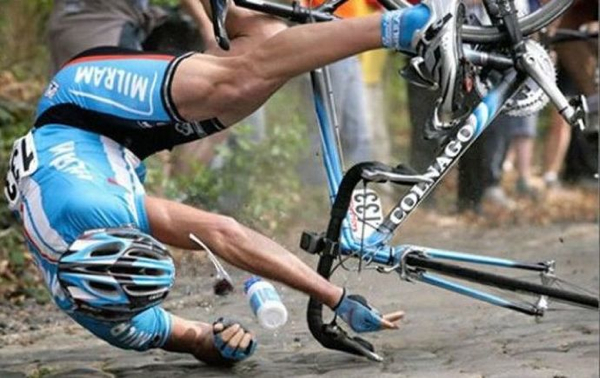 Listening to CBC Radio this morning, they covered the debate on whether helmet use should be eliminatedÂ for all riders. The argument against helmet use goes like this one on bicyclesafe.com:

Focusing on helmets distracts people from what’s more likely to actually save their lives: Safe-riding skills. I’m not against helmets, I’m against all the attention placed on helmets at the expense of learning how to not get hit by cars. Helmets are not the most important aspect of bike safety. Not by a long shot.

The importance placed on helmets has negative social effects. It paints cycling as a horribly dangerous activity, and is it any wonder why few Americans choose to ride bikes in that kind of climate? Cyclists who choose not to wear helmets get demonized as “stupid”, even though the research shows that they’re not at any greater overall risk than helmeted cyclists. Governments get motivated to pass mandatory helmet laws, which always have the effect of decreasing the number of cyclists. This is ironic, since the thing that’s most correlated with cycling safety is the number of cyclists on the road, but helmet laws result in fewer cyclists, making it more dangerous for those who remain.

Statistics Canada did a report on bicycle helmet use in 2009:

In 2009, more than 11.4 million people aged 12 and older reported bicycling according to the Canadian Community Health Survey. Of these, more than 4.1 million, or 36.5%, reported wearing a bicycle helmet all the time.

Several provinces have mandated the use of bicycle helmets, as wearing a helmet can help prevent or limit the impact of head injuries. In British Columbia, New Brunswick, Nova Scotia and Prince Edward Island, their use is mandatory for all age groups. In Ontario and Alberta, the legislation applies to children under 18.

Women were more likely to wear a helmet””40.2% of female cyclists did so, compared with 33.8% of their male counterparts. Among males, those aged 12 to 19 and 20 to 34 were least likely to wear a bicycle helmet.

Mikael Colville-Andersen gave a Ted talk on why we shouldn’t wear helmets:

A rebuttal to his arguments can be found here.

I would never ride without a helmet for these reasons.

His and HersA Government We Can Afford
Scroll to top