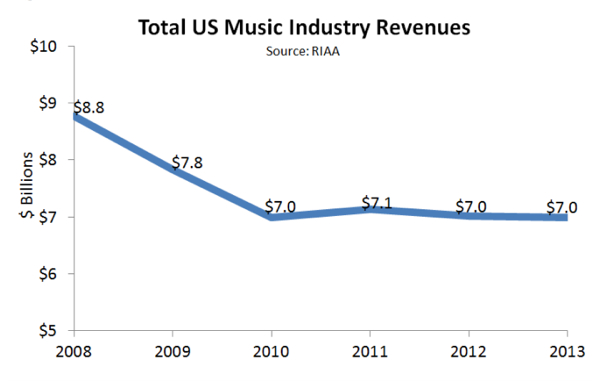 The Recording Industry Association of America has released its numbers for 2013. You can find the U.S. report here. It shows that even with digital downloads, subscriptions and streaming, the industry revenues are, at best, holding even in the U.S. after many years of decline. The overall picture shows an industry still in retreat.

From the music industry blog a few weeks back:

The IFPI and RIAA today released their annual music sales numbers. Though there are positive signs, overall they make for troubling reading

A similar trend can also be seen with the most recent data from the Camera and Imaging Products Association (click on the chart for a larger image): 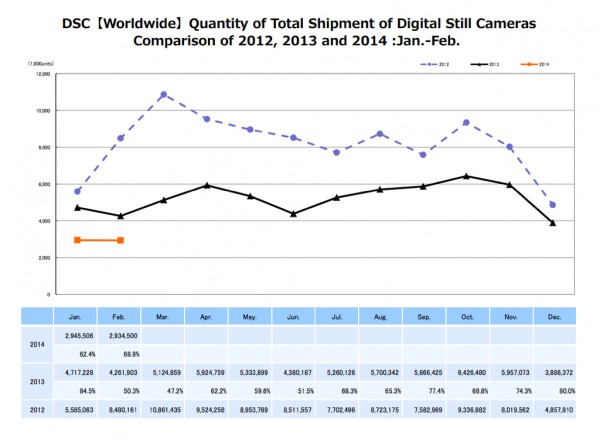 There were a number of factors that negatively impacted music sales. Increased competition for entertainment from TV, movies, gaming consoles, etc. The relative ease of copying and sharing digital audio. The reluctance of the consumer to pay for recorded music. The inability of the industry to quickly embrace new digital distribution models. One of the major factors was the emergence of portable digital music players. The convenience of carrying a music collection without the bulk of hundreds or even thousands of CDs created a dramatic shift in consumer behavior as well as a new business model that relegated the industry to a very different role namely as a provider of catalogs with sharply reduced profits.

And now the same thing is happening to digital still cameras. The new point and shoot camera is the smartphone. And the impact on the camera industry is no less dramatic than what happened to the music industry.

Digital decline and digital disruption. Both at the same time.