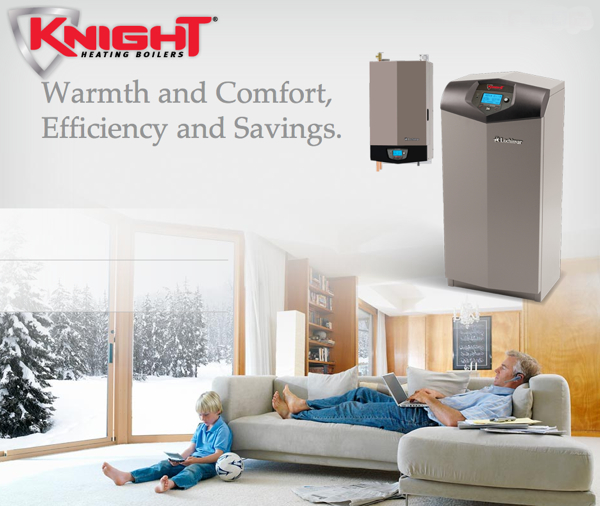 Looks so nice doesn’t it? Father and son bonding, not with each other, but with their devices. And barefoot. Important to be barefoot. And they do look warm and comfortable. Safe and secure from that cold winter weather. After all, that is the promise of the Lochinvar Knight Heating Boiler.

Unless you happen to own the KBN150 model.

In that case you might want to be prepared for a deep freeze.

18 months ago this boiler failed on us. It cost almost $2,000 to replace a failed logic board. The part was not covered under warranty. I mention that fact because the boiler was perhaps six years old at the time. We were almost two weeks without a heat source.

On Friday the boiler failed again, right in the middle of one of the coldest and harshest winters in recent memory.

We have been without heat and hot water for several days now. Initially, the service technician thought that the boiler required a relatively simple switch replacement. However, when he went to make the repair, he noticed a leak in the inside casing.

From what I gather, a leak in a boiler powered by propane is not a good thing.

The heat exchanger may be covered under warranty. We do not know. We have to pay for the part first. The part gets sent back to the manufacturer and then they make a determination to see if they will honour the warranty.

Hard to believe that we will have spent $7,000 over the past two years just to keep an 8-year old boiler running. I suppose I could have paid an extra $3,000 to get a new boiler but here is the risk and reward scenario: if they do honour the warranty then my cost will be a few hundred dollars for the service labour. If they do not then I will have paid 50 percent of the cost of a new boiler without the benefit of a new 10 – 12 year warranty. The warranty on this unit will expire in four years.

I hope they honour the warranty.