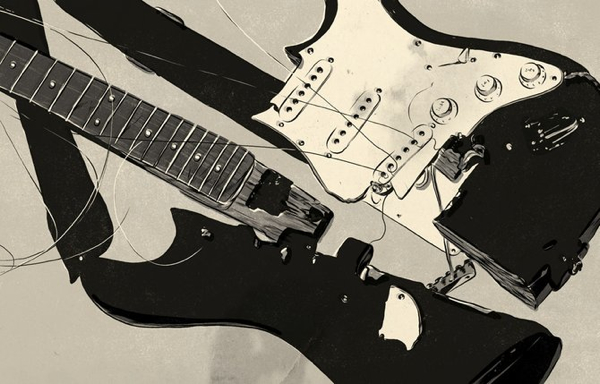 Many guitar players run into serious problems when they discover that they have picked up an injury from doing what they love, injuries will generally repair over time but this can mean an extended period of not playing guitar. Many GMC members have found it necessary to take a few weeks off guitar playing or in some more extreme cases several months or years. Some people think that they are immune from getting various arm, wrist and tendon related injuries because they have been playing for years with no problems — this tends not to be the case when guitarists start to concentrate their efforts on playing long periods of time on guitar…

During the months of October and November I had been spending at least two hours a day practicing and at least four hours or more of stage performance each week. My days at work are sedentary as most of the time is spent sitting in meetings or behind a computer. I spend most of my day in a prone position. Not good.

Beginning of December I experienced incredible pain in my upper back and shoulder. In a way, it felt like I had dislocated my shoulder. The pain was so intense that I was unable to sleep nor could I find a comfortable position to rest.

The pain travelled further along my right arm. I played through several concerts and weekly at my church with a very intense level of pain and discomfort. Until two weeks ago.

I stopped playing. Because the pain was just not going away.

I was told to stop in early December but I had too many playing commitments. I was told that if I did not stop playing, the pain would move from being acute to chronic. I kept going thinking that somehow the injury would heal on its own.

Here are a few things I learned from the experience.

I have to stretch. Several times a day. Every day.

And, if I experience pain, I have to stop playing. I have to rest and recover.

“Taking it easy” won”™t cut it: RSIs mostly just need rest ”¦ and plenty of it.Â The truth is boring: rest is incredibly powerful medicine for RSIs ”¦ but tedious and often spectacularly inconvenient, even job-threatening. This boring “miracle cure” is almost never adequately emphasized to RSI patients.

Fortunately, I had the benefit of a two-week vacation over Christmas. I rested. In a way that I had never done before. I think this was the best thing that I did for my RSI. But I tried to continue playing and that was a mistake as the pain would not go away. The pain is gone now. Hopefully I can play again in a few weeks time.

I received a note from Dopa about an article they had published on RSI and their site is W3C accessible. Great article about RSI and recommended reading. And even though I posted this article a little over 4 years ago, I have not had any recurring issues with RSI. I am still playing at least an hour or so a day.

The VaporizerVintage Gear
Scroll to top