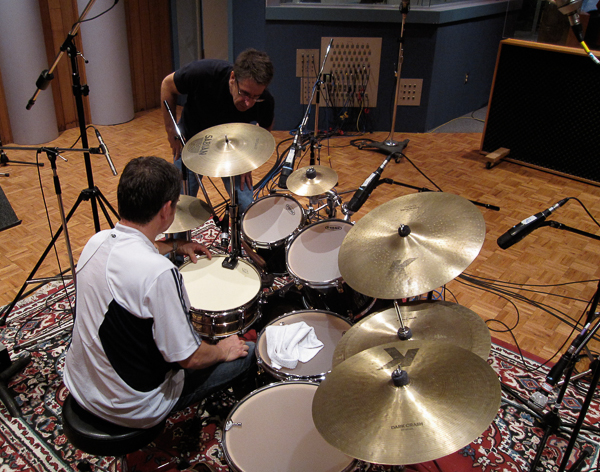 So many microphones. So little time. The photo above was taken at Phase One in Toronto. You can see me working on the mic placement for a drumkit.

When I approach a recording project, I spend a considerable amount of time in working through the microphone and preamp choices. Having recorded instruments for close to forty years, I have learned much about equipment, placement and technique.

However, the greatest single influence on the sound is the musician and how that musician plays their instrument. The type of microphone will provide a certain colour to the sounds captured in the air. But given a good acoustic environment and a good signal chain, most of the sound is from the player.

Mic preamps can also add a bit of colour but once you are into a certain quality of preamp, the difference in sound quality is subtle. Very few people listen to recordings and comment on microphone choices or preamp choices. That said, I find it absolutely critical to use the very best signal chain for the source. The capture process is a fundamental part of getting good sounds.

Below is the input list I am using for the upcoming session at Noble Street next week. I spent roughly 40 hours on the input list. Some instruments were very straightforward to declare. Others took much more time. I did lots of research and listening tests. I find I always make some changes once I get into the studio after I have had a chance to listen to the instruments in the recording space.

I love tracking through Neve preamps however Noble Street only has 18 channels available. The basics for this project require 32 channels. For a clear, uncoloured sound, I prefer Millenia preamps. I had 8 channels and they were an obvious choice for piano and acoustic violin. And then the APIs. Because of their slew rate, I like to use them on instruments with quick transients such as snare. For those instruments being taken direct, I generally bring them in through the console which, in this case, is a classic SSL 4056 E/G. TheÂ 4000 console has been behind more platinum selling albums than all other consoles combined.

When I record with Pro Tools, I avoid compression unless absolutely required. 24-bit recording provides more than enough headroom and allows me to focus on getting a good sound as opposed to creating a sound effect. I take the same approach with eq and effects printing. Minimalism when recording. Time for that other stuff once we get into mixing. 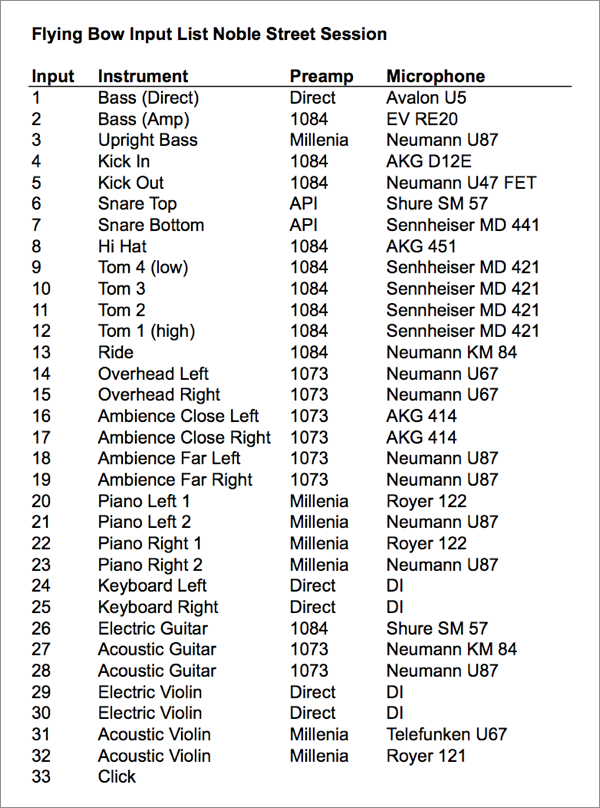