I was at home, alone with my fearless golden retriever, when I heard a repeating loud, explosive sound coming from the outside of the house.

The wind was certainly blowing hard. We have a small weather system that reports on a number of data points including wind speed. Gusts in excess of 50 kph were being recorded. Strong? Yes. But not so strong that I would be worried about wind damage. Wind direction was south, south east. Not typical for our area.

I went outside to investigate and I spotted the culprit almost immediately. 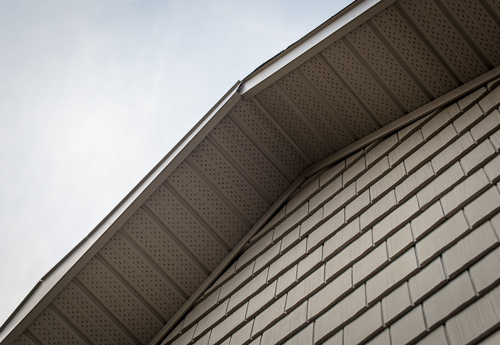 I could see that the fascia was lifted at the very peak of the roofline. And, looking towards the left hand side, I could see some lifting as well.

The peak of the roof is about 20 feet or so from the deck flooring. And, as I found out, my 16-foot ladder was not going to get me close enough to secure the fascia. I was also not too keen to climb up a ladder, twenty or so feet in the air, with winds gusting upwards of 50 kph.

When Lorraine came home, we decided to call a friend with a long ladder. And he was kind enough to come over to give us a hand. In the twenty minutes it took for him to get to the house, the wind had its way with the fascia. It now looked like this: 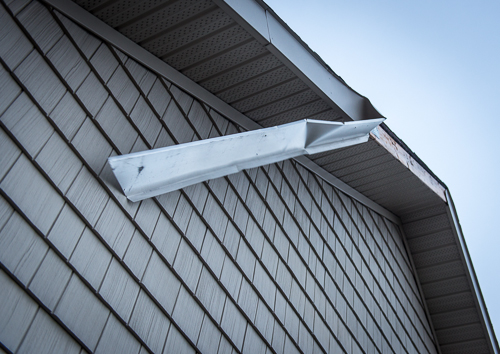 And the banging sound changed to a more aggresive “Thwack! Thwack! Thwack!” as the fascia slammed into the side of the house with each burst of wind.

The damage was not limited to the roof. The outdoor carpet on the deck also fell victim to the wind. 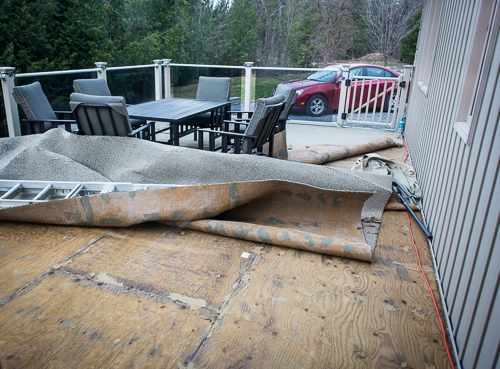 When our friend came over with the ladder, he was able to bend the fascia back and secure it to the house. We will have to replace it but at least it is no longer banging with the wind.

As for the deck itself, it may be time to resurface.

Vertical CityQuicken Not Only Manages Money
Scroll to top