I will be watching the Oprah Winfrey Network for the first time this evening. I want to see the interview with Lance Armstrong.

I started racing with the Lakeshore Wheelers in Montreal almost 40 years ago. Our club held weekly meetings during the cycling season and we would watch films of the major races. Like the 1972 Tour De France with Eddy Merckx: 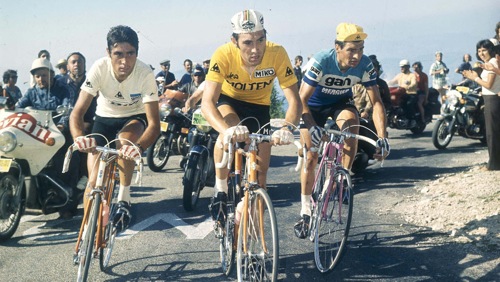 The riders were truly remarkable. Almost superhuman. They made quite a mark on me at the time.

Lance dominated cycling during the 1990s and the 2000s. His accomplishments were also remarkable. Superhuman. And the aura of cheating was around him for many years.

It may surprise some people to find the sheer volume of allegations and stories about his doping over the years. Cycling News has the most comprehensive list here.

Armstrong provided a statement when Hamilton’s book was first published:

Writing a book today about events that allegedly took place more than 10 years ago is not about setting the record straight or righting a wrong. It is greedy, opportunistic and self-serving.

Lance Armstrong’s interview with Oprah Winfrey will air tonight and Lance will talk about events that allegedly took place more than 10 years ago. I suppose that is somehow different from writing a book.