Winter has not taken its hold thus far. We’ve had a bit of snow, several dramatic shifts in temperature, lots of rain and now, on our 900-foot drive, lots of ice.

Because there was not enough snow to warrant a service call to clear the lane, we just packed the snow down with the weight of the cars as we drove in and out of our property. A significant thaw, followed by rain and then followed by freezing temperatures, transformed the lane into a skating rink.

Ice. Lots and lots of ice.

The temperatures went up again yesterday, plus 7 degrees Celsius, with more rain and the drive was best approached with skates. The ice pack is so thick that the rain acted as a proxy for a Zamboni machine, resurfacing the ice and making it very slick. Even my all wheel drive had a bit of difficulty getting up the hill.

As I have complete responsibility over my 900-foot road, I elected to treat the most challenging part of the hill with a de-icing agent.

The agent in question is packaged in 88-pound bags. Very easy for your typical consumer to handle.

To make the handling of the 88-pound bags even more enjoyable, the company elected to cover the outside of the packaging with a corrosive white powder. After handling the bags, most everything on your person becomes white. I suppose this makes it easier to become one with the snow. However, the acidic compounds that allow the material to dissolve ice are not recommended as a moisturizer for your skin. Removing the white powder from your outdoor clothing and from your skin simply rounds out the experience of securing the de-icing agent. I had yet to get it home.

At around ten in the evening, Lorraine and I had parked my car at the crest of the hill. How would we apply this particular de-icing agent? Particularly without any skates?

We used a wheelbarrow, a car, and several shovels.

We hauled an 88-pound bag out of the car and into a wheelbarrow. We slit the bag and emptied the contents. We turned the high beams of the car to illuminate the drive as it was pitch black and raining. We filled our shovels and, using an interesting dance technique — let’s call it the de-icing shuffle — we carefully slid along the ice, releasing the agent as we went along.

Treating the downhill portion of the lane was so much fun. In the dark. White powder everywhere. Slip, sliding away.

We repeated the process for each one of the 88-pound bags and called it a night.

On the way out this morning, the lane was once again filled with ice. If the de-icing material had made any significant impact it was not noticeable to me.

Here is to a sustained end of January thaw. Perhaps I will get lucky and the ice will melt down to the gravel. If not, I could always get a set of new tires. 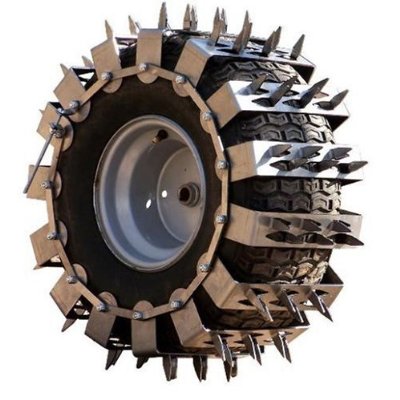