For whatever reason, I decided that the guitar would be cooler if it had gold hardware. I replaced the nickel bridge and saddle. And I took off the original tuners and put on a set of Schallers. I did all of this in 1980. I guess the Schallers would now be vintage.

I did not do a very good job installing those tuners as you can see from the picture below. 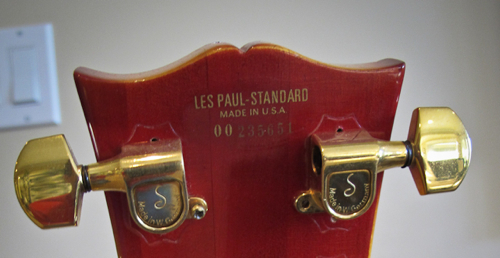 If you look carefully, the tuner on the right side is missing the retaining screw. Actually it broke off when I first installed it. And you can see the imprint from the original tuners. Sad to say, I fared no better on the other four tuners.

I also swapped out the pickups for something else. The something else may have been a couple of DiMarzios. They were pretty popular back in the 1970s. They sound really good so I will keep them.

I have decided that I would like to bring the guitar back into better playing condition. Truer to the original, I will get some nickel TonePros for the bridge and saddle. I will put back new original fit tuners, again in nickel, for the instrument and fill and stain any holes on the back of the headstock. And I will have the guitar professionally set up for 010s.

It is a very heavy beast so I may not be using it on stage very often. But it has a neat vintage flair and still looks great for an instrument that is closing in on 40 years of age.

An Apple A DayThanksgiving
Scroll to top