Geometrically, Spaceship Earth is a derivative of a pentakis dodecahedron, with each of the 60 isosceles triangle faces divided into 16 smaller equilateral triangles (with a bit of fudging to make it rounder). Each of those 960 flat panels is sub-divided into four triangles, each of which is divided into three isosceles triangles to form each point. In theory, there are 11,520 total isosceles triangles forming 3840 points. In reality, some of those triangles are partially or fully nonexistent due to supports and doors; there are actually only 11,324 silvered facets, with 954 partial or full flat triangular panels.

The appearance of being a monolithic sphere is an architectural goal that was achieved through a structural trick. Spaceship Earth’s is in fact two structural domes. Six legs are supported on pile groups that are driven up to 160 feet into Central Florida’s soft earth. Those legs support a steel box-shaped ring at the sphere’s perimeter, at about 30 degrees south latitude in earth-terms. The upper structural dome sits on this ring. A grid of trusses inside the ring supports the two helical structures of the ride and show system. Below the ring, a second dome is hung from the bottom, completing the spherical shape. The ring and trusses form a table-like structure which separates the upper dome from the lower. Supported by and about three feet off of the structural domes is a cladding sphere to which the shiny Alucobond panels and drainage system are mounted.

Here are a couple of shots of Spaceship Earth, one during the day and one at night. 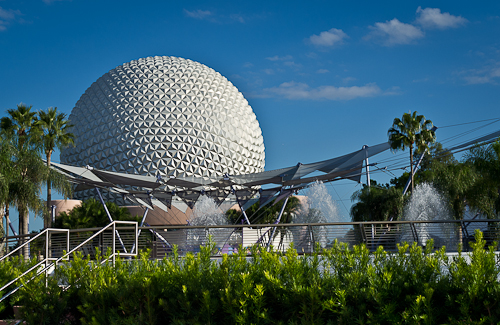 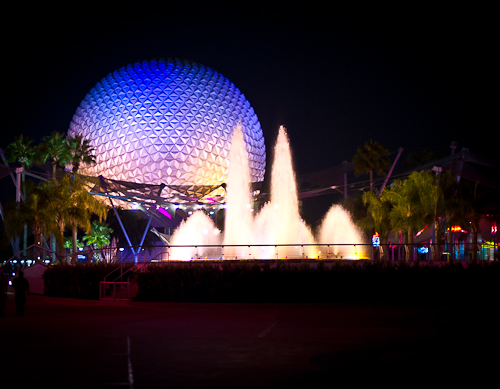