Yesterday’s hike on the Doe Lake Trail at Frontenac Provincial Park proved interesting. My hiking boots, supposedly engineered for adverse trails in winter, proved to demonstrate all the traction capability of a highly refined lubricant. Sections of Doe Lake Trail are moderate. However, I had a series of falls. One ended particularly badly for my left hip and foot. The moderate hike became difficult. Bruised and sore I am today.

Aside from the challenge of trying to finish out a couple of kilometers on slick trails in significant pain and without appropriate footware, I was also trying to capture some landscape shots.

And then some magic happened. But I missed the shot. Here are the two frames immediately before the event happened. When I take landscape shots, I use a tripod, a wired remote and I have the camera set to expose “mirror up”. I also generally shot in aperture priority mode. To ensure optimal depth of field, I usually have a small aperture and a long exposure. Good settings for landscapes. Here are the first two shots: 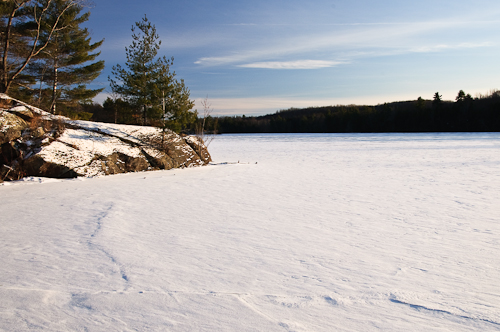 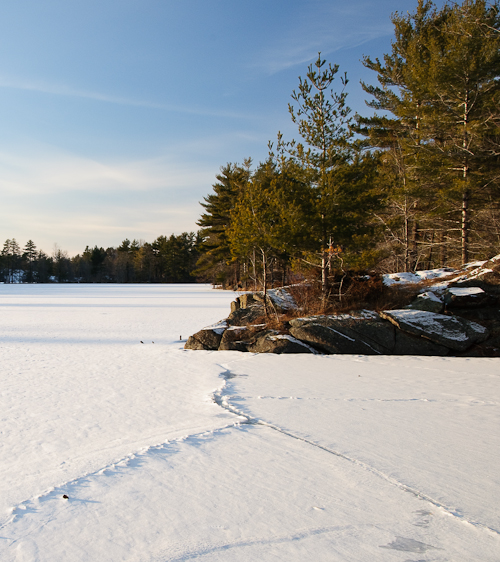 Then the event happened. Something big flew over my head. So large that I thought it was an airplane. It wasn’t. It was a massive owl. And it perched itself on a nearby tree. Close enough for me to capture this amazing bird.

So I point the lens to the subject. I go to focus. Okay. Subject in focus. He could move at any time. Must take the exposure. Keeping in mind that the wind chill was roughly 20 below Celsius, I was having trouble pressing the shutter on the remote. Bird is now looking right at me. Time to take the shot.

Rats. The first downward press of the shutter moved the mirror to the mirror up position. It did not take the exposure. Don’t panic. Try again. Pressing the shutter again grabbed the exposure. Except I was in low-light conditions. With aperture priority. F16 at 1 second exposure. As any wildlife photographer will tell you, not the optimum setting to shoot birds. Fortunately I happened to have the 18-200mm on the camera. I generally shoot with a 12-24mm for landscapes. But I wanted to zoom in on some details.

This was the result. The bird was not looking at me. And the bird moved during the lengthy exposure so the body is somewhat blurred.

I limped home hurt and disappointed that I missed the shot. 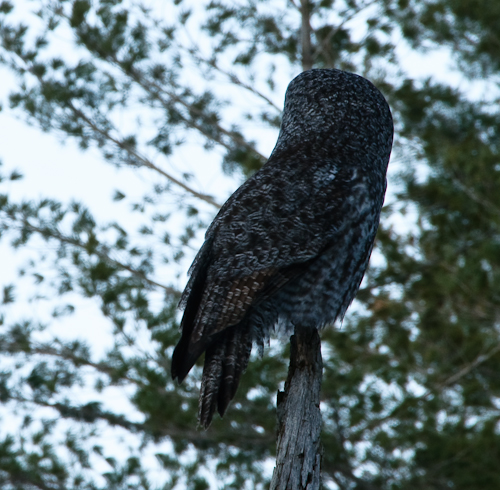