Reuters had an interesting note:

Microsoft Corp. said it still expects its Xbox video game division to make a profit in fiscal 2008 after announcing a fiscal 2007 charge of more than $1 billion to cover repairs to Xbox 360 consoles.

“Our goal has been to have Xbox profitable in the coming fiscal year 2008,” said Robbie Bach, president of Microsoft’s entertainment and devices unit. “We don’t think this changes that in any way.”

The chart below shows how Microsoft stock continues to respond to the management capability of Microsoft.

Bach, who leads a unit that consistently loses billions of dollars for Microsoft, also conceded that Microsoft will miss their unit forecast for the Xbox. Interesting that he continues to predict a profit in FY2008. We’ll see.

But pity the poor Microsoft shareholder. Apple, on the other hand, is performing exceptionally well. 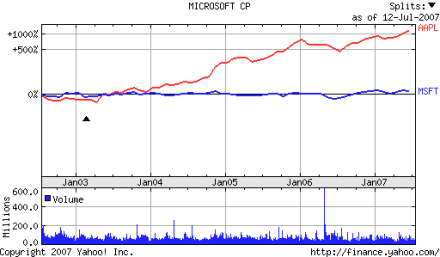 How To Shoot WaterfallsThunder, Lightning, and iPods
Scroll to top