After a 56-day trial ending with a jury verdict on May 25, 2006, Skilling was found guilty of 19 out of 28 counts: conspiracy, insider trading, false statements to auditors, and securities fraud.

He is 52 so the sentence is pretty much a life sentence. I read Eichenwald’s book, Conspiracy of Fools, last month. The book is an intriguing presentation of the rise and fall of Enron. I was quite upset as I read the book. How could such people rise to the top leadership ranks in a corporation?

Ken Lay, Jeff Skilling and Andy Fastow. Terrible leaders. Even worse managers. And no character other than pursuing their narrow personal agendas of self-enrichment and self-promotion.

After reading the book, I think both Skilling and, in particular, Fastow, got off with light sentences. Both men should have been jailed for life. Ken Lay was convicted but died of a heart attack. His conviction was voided. 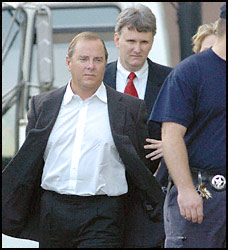