CBC had an interesting article on the state of guitar solos in recorded music. Guitar solos are dead.

Warren Kinsella, a musical genius in his own right with this band, had this to say about the reason for the demise of guitar solos:

The CBC article goes on to say that while soloing might be impressive, it”™s an activity that guys do alone in their bedrooms. This clip, which is actually quite good, is served up as an example of isolationist shredding.

When I posted on the top 100 guitarists of all time, I received a significant amount of email and comments. There were lots of opinions on the best guitarists. And, pretty much without exception, soloing was a significant aspect of the player’s talent.

Meanwhile, here is a list of the greatest rock guitar solos. And a picture of one of my favourite guitarists, Larry Carlton. He was born on the same day as me, March 2nd, although he is nine years older. Larry is still going strong at 58. 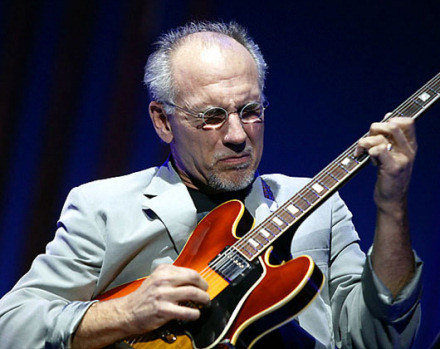