National Post covered a story on Microsoft investors calling for a share buyback. Here is one of the quotes:

“How can you have a CEO who is really indifferent to the price of the stock?” asked Joseph Rosenberg, chief investment strategist at New York-based Loews Corp. “He has his head in the sand.”

And from USA Today:

USA TODAY reporter: “Well, you guys have proved over and over again being first is not necessarily …”

Ballmer: “We love to be first.”

Reporter: “You love to be first but …”

Ballmer: “We love to be first.”

Reporter: “You certainly weren’t the first Â— you know, I mean, here looking at your …”

Ballmer: “We love to be first. Well, our big success is Windows. We were first. Windows, we were first Â— and then everybody faded out because there was a period during which the concept was Â— I mean, Apple stuck around with their concept of that, but everybody else faded out, basically.”

Tech people must be scratching their heads. Windows wasn’t the first graphical user interface Â— that was invented by Xerox and was first made popular by Apple Computer. Microsoft didn’t have the first browser or video player or cell phone operating system. Time and again, the company has come in late and, in many cases, won the day with tenacity. It is a strength Microsoft could boast about but doesn’t.

Rewrite the history books Steve. It happens all the time. But before you do that, why not set another objective: be first in creating value for your shareholders. 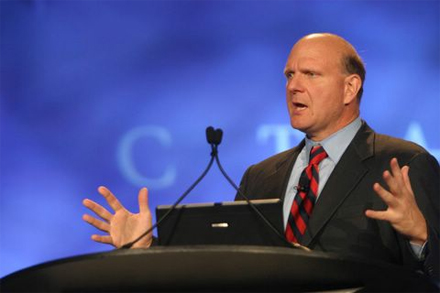 The Future of PowerPointThe Link
Scroll to top