Dvorak writes about the Microsoft malaise here. Actually, all you need to do is look at the stunning performance of the stock over the past several years. Or maybe read a bit of Mini Microsoft here.

Dvorak highlights the following eight signs of Microsoft’s corporate malaise. He also points out that it is a company that still makes a lot of money. For someone. Certainly not the shareholder.

1. Vista OS. It’s now so delayed that its consumer version will miss the 2006 Christmas season. It’s now supposed to arrive in early 2007. Even when it does, all of its promised cool features have been removed and it appears to be little more than a gussied-up version of Windows XP. It appears as if it is going to be a great disappointment. This should have been the company’s number one priority.

2. Office 2007. There is nothing in this new suite that is going to do much more than sustain the product as a dominant office suite. Unfortunately seven different versions are going to be released which will just confuse things. A new enterprise version has been added which appears to have a Lotus Notes-like element called Microsoft Groove. This is being sold as some sort of solution for online collaboration. If it is anything like Notes it will create a lot of anguish with users.

5. Xbox360. The potential to become the dominant game platform and an eventual and enviable profit center. Unfortunately the company did not foresee the Sony delays and failed to manufacture enough units to satisfy the demand. This was an exhibition of poor planning and bad business intelligence gathering.

6. Pad-based computing. According to Gates just a few years back this was to become the dominant form of computing by now. What happened?

7. Dot Net initiative. The .Net framework that many believe is an example of how Microsoft can actually put together elegant and powerful architectures when it wants to, is being killed by Open Source systems that are free and almost just as powerful. Microsoft has been unable to cope with Open Source except to complain about it.

8. Preoccupation with Google. Microsoft is too easily distracted by successful companies who are not competitors. There is a deep-rooted belief that if a company like Google is successful, then they are an enemy per se. So the company obsesses on what Google is doing rather than concentrating on important Microsoft projects. Now Microsoft is about to do a deal with Yahoo to flank Google. This old-lady-like skittishness is unbecoming for a company this size.

This only scratches the surface of the Microsoft malaise. Now if the investment community sees light at the end of this tunnel good for them. I sure don’t see it. I see a company that has settled in and has become big, profitable, and unexciting, lacking real focus or spirit. 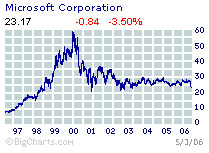