Okay. This guy is really good. We were on our way to dinner last night and walked by the David Copperfield ticket booth at the New York casino. I’ve never seen him perform live and, purely on impulse, we went over to see if there were any tickets for the show.

We were in luck. After dinner we took in an amazing performance of illusion and magic. Sadly, the geek in me kept trying to figure out how the tricks were being performed. For example, in one segment, Copperfield correctly predicts a six-number sequence. The sequence begins with an emotional story about the failed dreams of Copperfield’s father and the hard actions of Copperfield’s grandfather in discouraging Copperfield’s own vision of a career as a magician.

Copperfield told us that his grandfather obsessed about a particular car and played the same six numbers in a lottery for years hoping to win the big prize so that he could buy that car.

Copperfield rolled out a sealed box, with locks, which contained an audio cassette as well as paper.

He then selected audience members at random to provide him with numbers and some personal information (e.g., boxers or briefs).

He wrote the random numbers and personal information on a large board. And then, after suitable flourish, he had members of the audience unlock the sealed box. The cassette was played back. And his voice spoke the numbers picked at random by the audience as well as the personal information. The paper was held up and Copperfield revealed the written confirmation of the same random sequence.

And then, he took two pieces of old rusty metal license plates. License plates from his Grandfather’s cars. And the numbers? The same numbers as the random numbers provided by the audience.

He alleges that the odds of being right are one in a trillion.

How did he do that? 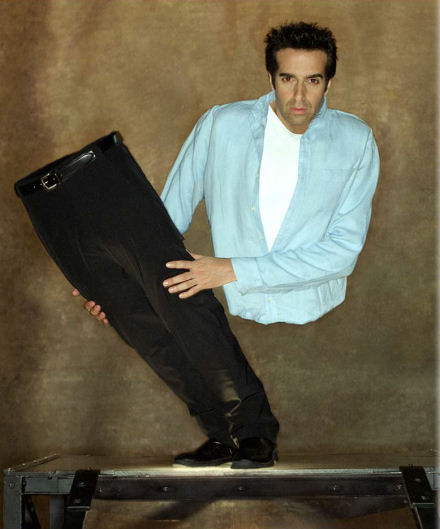 May I Use Your Phone?
Indomitable Spirit
Grand Floridian
I Love Me
Series 2
Camping
A Major Offence
Polar Express
0 replies