I came across this article on the live sound rig for Cream’s reunion concert at Royal Albert Hall. An interesting counterpoint to the almost negligent way that some musicians approach their live sound requirements. If you don’t pay attention to the sound system that you use for live performances, don’t be surprised when things do not sound good.

Front of house engineer Chris Hedge, pictured below, used a Midas XL4 console. The XL4 was used in standard configuration, mono inputs 1 to 44, stereo 45 to 48. He used about 30 inputs, including 14 channels of drums for Ginger Baker, four channels of bass for Jack Bruce who has two bass rigs, a Warwick and a Gibson, and four channels of guitar for Eric Clapton, two clean and two on a Leslie.

Obviously, a world-class act will take a no-compromise approach to producing great sound from the stage. With a little bit of effort and budget, smaller acts can accomplish similar results. However, picking up cheap rental gear from the local music shop won’t help much. I played in such a situation a few weeks back. The sound coming from the speakers was really, really bad. No lows, muddy mids and overhyped highs with very poor dispersion. Walking around the room and listening to those speakers reminded me of the sound of a cheap boombox in a shower. Except not as good. 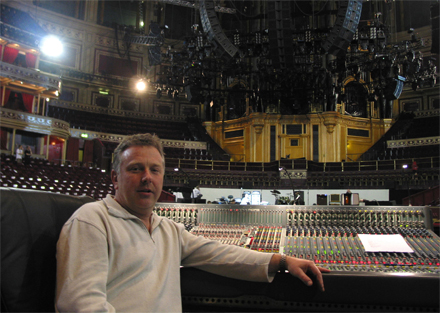 Milestone
Testing, Testing
CD Release
On Vacation
What to Buy
Getting Closer
Do It Yourself
Live Sound
0 replies

Turning 30How To Get Fired
Scroll to top