Rick Warren, pastor of Saddleback, is the author of The Purpose-Driven Life. His book, which was published by Zondervan on October 1, 2002, has sold more than 24 million English language copies as well as millions more in other languages.

As money came in from his book, Warren stopped taking an annual salary and repaid Saddleback for his 25 years of salary since its founding. He and his wife became reverse tithers, keeping 10 percent of their income and giving away the rest, including $13 million in 2004.

At his church last month, Warren reminded his congregation that life is not about having more and getting more, rather it’s about serving God and serving others.

This month, he is leading a trip to Rwanda, to train pastors and distribute medicine and money to battle AIDS and other diseases. It’s part of what he calls his global PEACE plan (Plant a church, Equip leaders, Assist the poor, Care for the sick, Educate the next generation).

I went to Warren’s church last year and I was impressed with the focus on impacting the world. I still remember the message of that day. Gary Haugen, founder of International Justice Mission, shared his group’s efforts in liberating children around the world from slave labour and prostitution. You can learn more about Haugen’s work here.

Saddleback is located in one of the most affluent areas of the world. Somehow, Rick Warren has been able to encourage people to catch a vision and to use their money to achieve something greater than personal consumption. Whatever it takes. 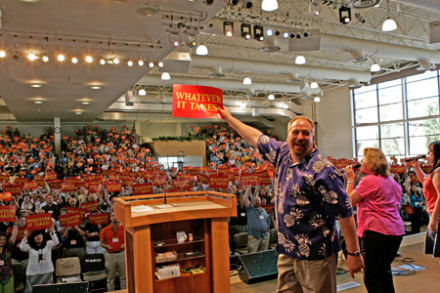