In the United States, their revenue agency is required to publish an annual report on individual tax returns reporting an income of $200,000 or more. They also release information on the income and taxes of the wealthiest 400 Americans. In 2000, their combined income was $69 billion. To put that in perspective, 400 Americans made more money than 161 million people living in four of the poorest African countries. You can find out more about one perspective on the share of income tax paid by the rich in Canada here.

One such American, Larry Ellison, made the news earlier this week. Larry Ellison is the founder of Oracle. It seems that Larry is having trouble living within his $1 billion line of credit. Ellison pushes his credit limit to its maximum to finance his yachts and homes. He also spends some $20 million on lifestyle expenses. And, to make matters worse, he borrows this money against his stock.

His net worth is roughly $17 billion. The attached was released to the public as a result of shareholder lawsuits. I wonder how much work it takes to manage such a household budget. 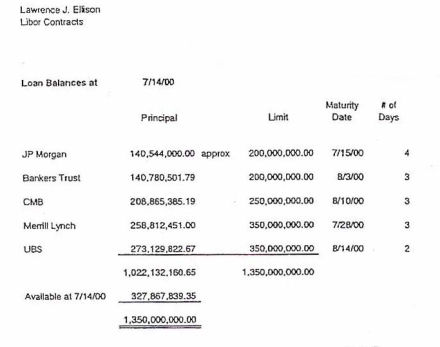