PC World produced their list of the 50 greatest gadgets of the past 50 years here.

Being a bit of a gadget guy, I thought I would see how my adoption patterns mirrored the top ten. Here is the list and here is my status against the list. 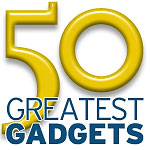 Only in Canada, ehiPod Theology
Scroll to top