Jim Cramer, host of CNBC’s Mad Money, made a recommendation on a Canadian stock a few days back. The stock? ATS Automation Tooling Systems. The stock trades on the Toronto Stock Exchange under the symbol ATA.

Apogee Technology, a small sensor company under threat of delisting from the American Stock Exchange, had seen its stock plunge over 80% from the beginning of 2005. It closed the year at 91 cents.

That did not deter the investors who follow Jim Cramer’s recommendation. After all, a buy for ATA is complicated enough without having to worry about the exchange. And so the shares in Apogee Technology doubled in three days.

On Monday, Apogee’s volume was 2,700 shares. After Cramer’s recommendation on the Canadian ATA, the American ATA surged to 733,000 shares. It jumped another 16% on Thursday to close at $1.92.

A new way to make a quick dollar off the market. Wait for Cramer to yell a buy on a foreign exchange. 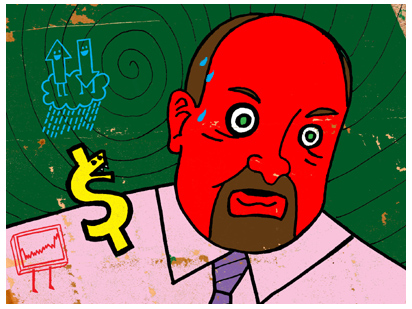