We arrived in Houston safe and sound. Toronto airport was unusually quiet. I tried out the web-based check-in feature of Air Canada before we left for the airport. Up to 12 hours before your flight, you can check in and print out your boarding pass off the Air Canada website.

I was quite keen to use Microsoft’s Street and Trips 2006 GPS edition. I had upgraded my 2005 edition before the flight as the new edition offers voice commands. I figured it would come in handy as Houston is a bit of a challenging city to drive around. I had also printed out road maps just in case.

Microsoft assumed, when I upgraded my 2005 GPS edition, that I did not intend to use the GPS on the 2006 edition. Why? I have no idea. When I plugged in the GPS, I got an unknown USB device message. No problem, I thought. I’ll load up the 2006 edition and it will configure the GPS.

A few thousand miles away in Toronto.

Air Canada has a similar approach of releasing things that aren’t quite finished. We got quite a chuckle when we boarded the brand new Canadair CRJ-700. On the back of each seat was a sticker. I took a picture of it below.

No inflight entertainment for our trip down. That will come in a future upgrade. 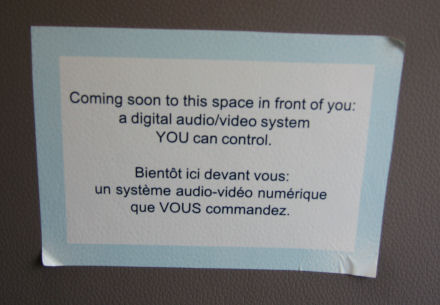