I upgraded my daughter’s iBook to Tiger when she was home a few weeks back. OS X version 10.4, Tiger, is the fifth and latest major release of Mac OS X and it was released to the public on April 29, 2005. It was preceded by Mac OS X v10.3 Panther. I’m still running Panther on my dual processor G5 studio computer. Our other Mac runs Tiger.

I will be upgrading the studio machine to Tiger when I upgrade to Pro Tools HD 7. I’ve tentatively booked some time over Christmas to make those upgrades in the studio.

Microsoft is working on features similar to Tiger for the next version of Windows called Windows Vista (previously known as Windows Longhorn); however, Vista is not expected until sometime in 2006.

Apple had a series of posters when it introduced Tiger with slogans such as “Introducing Longhorn”, “Redmond, start your photocopiers”, “Redmond, we have a problem”, and “This should keep Redmond busy”.

Longhorn, now Vista, is several years late. Running the Vista beta, it reminds me of Tiger. Just not as good. 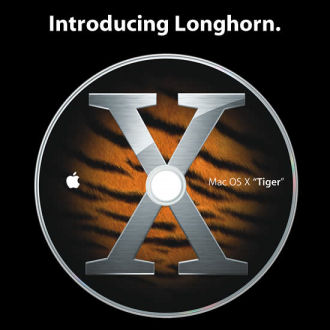 Apple Shares Skyrocket
Can You Hear Me Now?
Another Day, Another Hosting Service
Back To Tape?
Game On
Redesign Underway
iPhone
Windows Vista RC 1
0 replies