I received a number of emails and a couple of comments on my upcoming visit to Lakewood Church.

And, yes, I am very interested in the audio/visual capabilities of this church.

Lakewood took over the former Compaq Center. The Compaq Center was the one-time home of the Houston Rockets basketball team.

The church spent nearly $90 million in renovations. The facility”™s original playing surface was replaced with a raked floor. One end of the arena is an elaborate stage area with dual choir lofts, an orchestra “pit”? capable of multiple elevations, large LED screens at stage right, center, and left, plus cascading waterfalls on each side of the stage.

The church”™s production activities are managed by four Euphonix consoles””a System 5-B at the sanctuary”™s FOH, a Max Air at the monitor position, and two System 5-BPs for on-air and audio post work.

This facility is equipped with two identical control rooms developed for the church by the Russ Berger Design Group.

In addition to identical System 5-BP consoles, each control room and FOH is equipped with 112-channel Steinberg Nuendo DAW systems that function as the main recorder/reproducers. MADI serves as the common interface between the consoles and Nuendo, while iZ Technology RADAR and TASCAM DA-98, 88, and 38 digital multitracks provide backup.

The church worked extensively with Colorado Springs-based Audio Analysts to tame the acoustic environment. They achieved an RT60 of 1.6 seconds. Amazing. 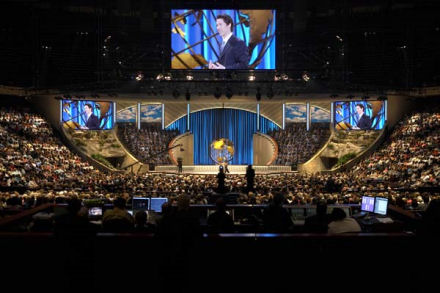 Houston, We Have A ProblemHoly Grail
Scroll to top