The picture below has eight different perspectives. Spend a few moments and see how many you can make out.

It is a bit of a strange test. Some people will be able to see all eight perspectives and others will not. Even those who can see the different views will have trouble holding some in mind and getting them to come to mind when they want to evoke them.

In some ways, this picture, because of its multiple perspectives, provides the best example of personality. The personality of an individual person is based on the attitudes and behaviors that get conveyed to others in various situations.

Some attitudes and behaviors will only become apparent in certain situations, while others will be fairly obvious at all times.

Leo Tolstoy had this to say about perspective:

“I know that most men, including those at ease with problems of the greatest complexity, can seldom accept even the simplest and most obvious truth if it be such as would oblige them to admit the falsity of conclusions which they have delighted in explaining to colleagues, which they have proudly taught to others, and which they have woven, thread by thread, into the fabric of their lives.

It was very hard. Much harder than making out the different perspectives in the picture below. 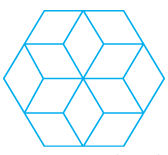