Music is a very tough business. And yet some people have been extremely successful with music. For that matter, some people also win the big lottery. The two points are closely related.

I get asked questions about record deals. Almost as though record companies are out there just waiting to hear an unsigned artist’s latest musical creation.

But it’s a question of realism whether or not there are such things out there, and there certainly aren’t as many (record deals) now as there were 5 years ago or 10 years ago. To the contrary, the function of the A&R guy in a large record company now is precisely to keep the local bands on the sidewalks ”“ to screen these people away from the label, not to gather them into it. They have no money to sign new acts. These guys are told don’t sign anybody. And so it’s not surprising to see the open reel tapes stacked up from floor to ceiling, the unlistened to cassettes lying around. They’re not there to sign acts, they’re there to maintain the public relations posture of the record company, which must, by its nature, be in contact with new and young aspiring acts without offending them. Stay in contact with them, but don’t sign them. You can’t sign them if there is no money. If there’s no money, there’s no one that is going to get signed. Well, right now there’s no money, right?

The above advice came from Gil Markle in 1981. Gil owns Long View Recording Studios. Gil was once a teacher. He decided to leave teaching to buy a farm. And at his farm he built a world-class recording studio. He became very, very successful.

So, there was no money in the 80s. There is not much more today. For most artists, the best advice is to get a good paying day job. 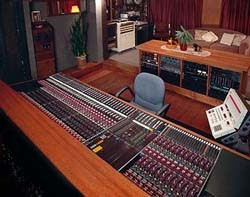 My Own Room
I’m Converted
Success with Pro Tools 6.4
Making It As A Songwriter
Reference CDs
Another Group
Music Rising
It’s The Board
1 reply

Which Way?Message to Americans
Scroll to top