I received a news alert from one of my readers yesterday.

WASHINGTON (CNN) — Golfers should expect searches and a police presence at major courses now that the Department of Homeland Security has identified specific threats against such well-known courses as Augusta National and Pebble Beach. Canada is not immune from this threat, with Taboo (the home course for Master Champion Mike Weir) also being named.

Golfers are being cautioned that security check-in lines at the pro shop could be long.

Today, the truth was revealed. The news alert was a joke. A feeble attempt to disrupt my game. A pathetic attempt to introduce fear and uncertainty into my golf swing. There is no greater misdeed than the act of a person engaged in the pyschological warfare of golf.

I could do no wrong at Taboo yesterday. I enjoyed another round in the 70s, I shot 77, and I played one shot better than my handicap.

Needless to say, I have to go back to Golftown and get a refund on all my golf glasses. They were supposed to take at least six shots off my game. And then I will have to deal with the scoundrel.

When he least expects it. 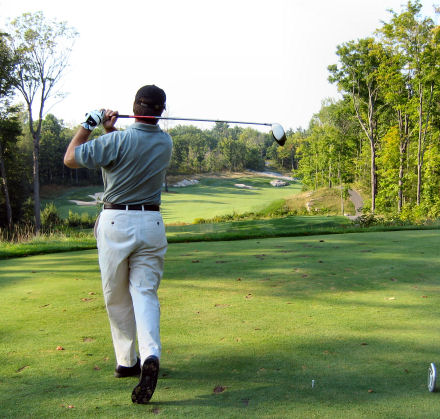