Funny what some parents will do for their kids. Last night my 17-year old went out with some of his friends. They went over to one of his friend’s house to watch a movie. In a stunning display of poor judgement, the parents opened up the bar for the kids. And all of these kids were under the legal drinking age. The parents’ view is that kids will drink so why not offer it in a home environment where it can be controlled.

Why stop at alcohol? Why not offer them drugs and cigarettes too? And perhaps arrange for a stripper as well? I mean, if you are going to be a progressive parent, why not anticipate all of these adult pleasures and expose your kids, and their friends, as early as possible?

To his credit my son declined the alcohol. His friends did not. At least one of them had to be driven home as he was completely gone.

In Ontario, it”™s illegal to consume alcohol before the age of 19. It”™s also illegal for anyone to supply alcohol to minors.

Under the Liquor Licence Act, anyone convicted of supplying alcohol to a minor faces a fine of up to $200,000 and up to one year in jail. Anyone who holds parties for minors where alcohol is served is also subject to criminal charges and civil liability.

My preference would have been to lay charges however my wife asked me not to call the police. She went to talk to the parents directly and informed them about the potential consequences of their behaviour. They were not aware of the law and thanked her for the insight. Whether they think twice before serving alcohol to minors again is another question.

I could not talk to those parents. I was so angered by this nonsense. Sometimes the only way to deal with stupidity is through the law. 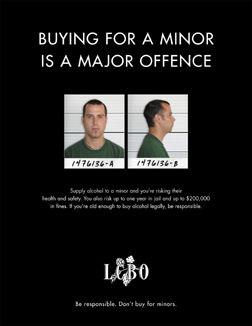 Most Admired
Hit Me
On My Honour
Vacation
Hike, Hike
Technology Woes
Valley of Fire
Not Here
3 replies