We got through 4 songs yesterday. We put down about 40 tracks of background vocals per song or roughly 160 tracks of recording in about 7 hours. Needless to say, the vocalists did a superb job in the studio.

The vocal arrangements were very tight and reminded me very much of Crosby, Stills, Nash and Young (CSNY). My oldest son had never heard of the group. So we took a run out to Best Buy last night and I picked up the only CSNY CD that they had on the shelf: 4 Way Street.

4 Way Street was released in March of 1971. It peaked at number one on the charts and it stayed on the charts for 42 weeks. It was certified gold.

And it is one of the worst recordings that I have ever heard in my life.

Crosby, Stills, Nash and Young had about as much business recording live concerts as did the Monkees. Perhaps not as monumental a disaster as CSNY’s six cuts on the two Woodstock albums, but not too far behind.

My son got to hear what their vocal arrangements were like. And his view was that he liked what the vocalists did in the studio much better. Which, by the way, was done pretty much live off the floor. Although the vocals were layered, and although I will edit the takes to ensure a high standard, the talent in the studio yesterday was vastly superior to what was arguably one of the most popular vocal groups of the seventies. 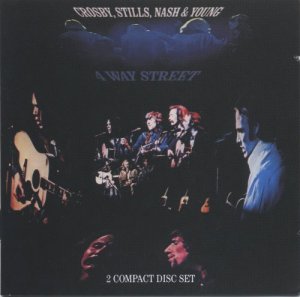 In A Strange Land
Time for a Pro Tools Upgrade?
Latency and the Quest for Tone
The Masters
Lock and Load
Just Sitting In
One Fine Morning
Nice Hall
5 replies

A Moment To Remember ET Phone Home
Scroll to top