My first personal computer was a Timex Sinclair 1000. This computer featured a Zilog Z-80A microprocessor running at 3.25 MHz with 2 kilobytes of RAM. The Zilog Z-80 chip contained roughly 6,000 transistors.

I am looking at replacing the graphics card on one of my Wintel boxes. The Nvidia GeForce 6800GT looks like a strong candidate. The chip on this graphics card has a 1 GHz memory clock, 256 megabytes of RAM with roughly 220 million transistors. You can see a picture of the BFG graphics card at the bottom of this post.

One of the earliest supercomputers was the Cray-1. This computer ran at 80 MHz with a maximum of 8 megabytes of RAM. The processor offered about 800,000 transistors. Obviously today’s graphic cards easily outperform the first generation supercomputers.

The first Cray-1 was purchased by the National Center for Atmospheric Research in 1975. The computer cost roughly 8 million dollars. And it weighed about 6 tons including the freon refrigeration unit. 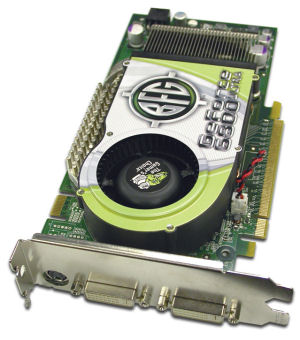 Another Day, Another Hosting Service
Apple Patches
Lord of the iPods
The Boss Stole My Identity
New XBOX Revealed
Does Your CEO Blog?
Completely and Absolutely Bizarre
Blogging Is Just A Fad
0 replies