Q: What is the Osborne Effect?
A: Announcing a successor without being able to ship it.

The original Osborne Effect led to the collapse of Osborne.

The Osborne was introduced in April of 1981. This portable computer cost roughly $2,500 Cdn and it weighed in at a hefty 24.5 pounds. The processor was a Zilog Z80 running at 4MHz. The unit came equipped with 64K of memory and a 5″ monitor. There was no hard disk. Storage consisted of two 5 1/4 inch, 91K floppy disk drives.

In 1982, the Osborne Computer Company announced a successor, the Executive model OCC-2 with a larger screen and a cooling fan.

And shortly thereafter, they announced the next system, the Vixen, an MS-DOS compatible portable.

Unfortunately, potential customers stopped buying the Osborne 1, waiting for the Executive and the Vixen, which wasn’t even ready to ship yet. Osborne sales plummeted and Osborne quickly ran out of money and filed for bankruptcy in September of 1983.

The Osborne was a beautiful laptop. Too bad you can’t buy them anymore. 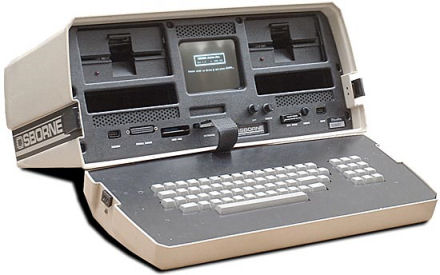 Boot Camp
Completely and Absolutely Bizarre
Are You Tonedeaf?
Mac Mini
The MFP Scandal
Secure Your Network
Checkers
Can You Hear Me Now?
2 replies